Hall of Fame trainer Bob Baffert added his record-breaking seventh Kentucky Derby trophy to his collection Saturday when Zedan Racing’s Medina Spirit held on to win the 147th running of the “Run for the Roses.” 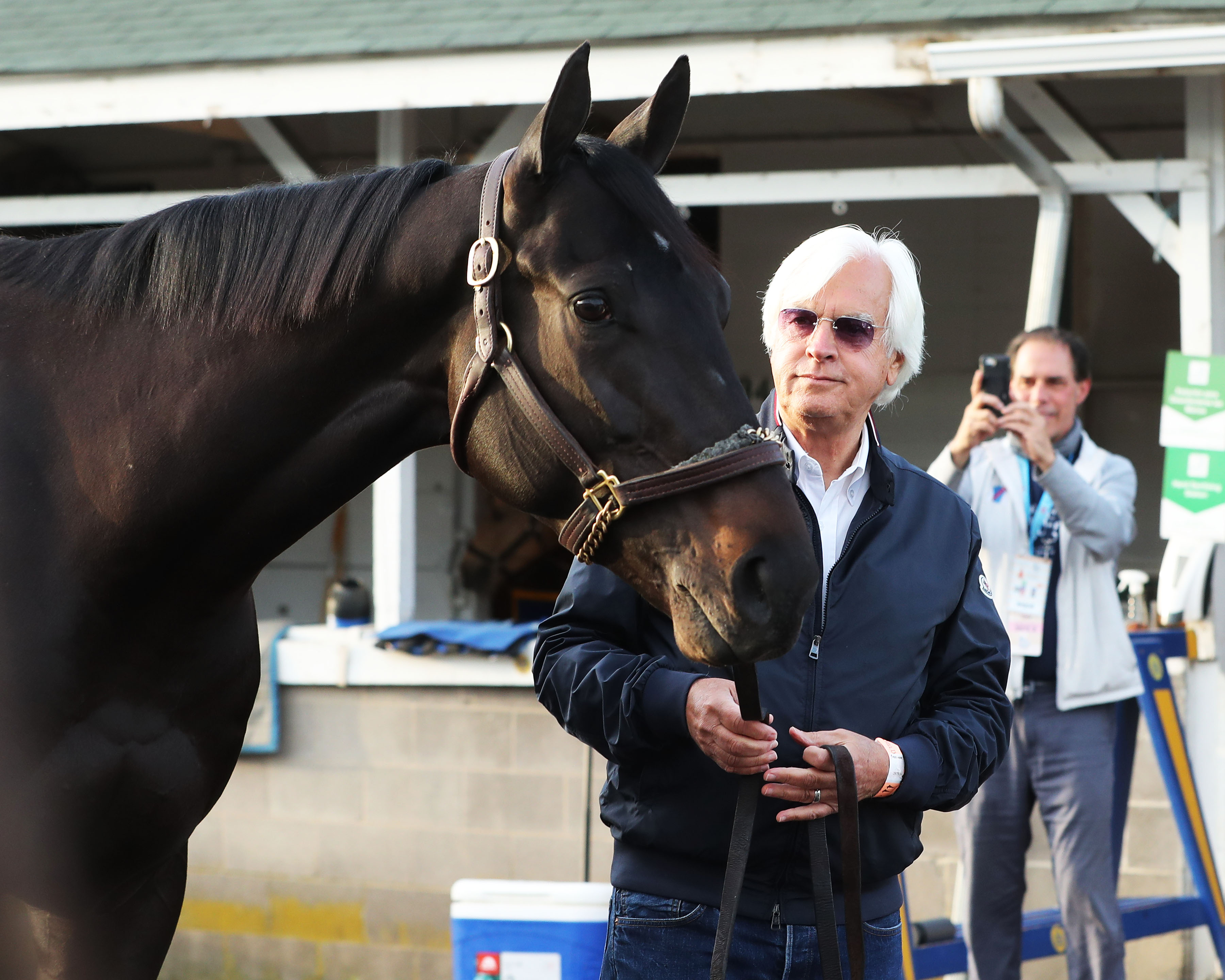 Medina Spirit claimed the Garland of Roses in the 147th running of the $3 million Kentucky Derby presented by Woodford Reserve. The Company reported that 51,838 fans reveled under cloudless skies to watch as the “Most Exciting Two Minutes in Sports” triumphantly returned to the first Saturday in May at Churchill Downs Racetrack (“Churchill Downs”).

“Can he win the Triple Crown? I don’t know. But he’s the Derby winner, and that’s all that matters,” Baffert said Sunday morning at Barn 33. “I was coming in here, thinking, I wasn’t sure (if Medina Spirit could win the Derby), everything had to go perfect for him. We were going to go to the lead, and see what happened. What if they challenged him? He made the lead pretty easily, for him, and the other speed horse didn’t break (Rock Your World). That’s what it’s like in the Derby: You have to get the trip; the other speed horse didn’t get the trip.

All-sources handle for Opening Night, Saturday, April 24, through Derby Day, Saturday, May 1, was recorded at $314.6 million, up 79% from last year.

“Going down the backside, he was doing it easy, you could tell he was enjoying himself. His ears were forward. And turning for home, they came for him, and he just dug in. I didn’t know if he was going to do it. He fought hard, and ran sort of the same race that he did at Santa Anita when he won the Robert Lewis. They came to him, and he fended them all off.

“I couldn’t believe it, at the sixteenth pole he was fighting and fighting. It was just a thrill to watch him do it, and fight on.

“And he came back, he’s handling it quite well. He wasn’t as tired as I thought he might be. A big race like that, but he handled it quite well.”

With the victory, Baffert now is the all-time leading Kentucky Derby winning trainer with seven triumphs, a run that began in 1997 with Silver Charm.

“When they turned for home, I was still not convinced,” Baffert said. “We didn’t start screaming and yelling until about the sixteenth pole, when it looked like it was do-able. In that last hundred yards, we all were screaming and yelling like it was my first Derby. We were like crazy, crazy. That’s what the Derby does to you. There’s no other race like it. The seven hasn’t quite sunk in yet. And to do it with a $35,000 horse. It gives people hope, keeps their dreams alive. Actually he was the cheapest yearling, since he cost $1,000. But he’s a beautiful horse, a good-looking horse.

“I stand here in front of you guys, and you don’t know how much I appreciate winning this, especially as you get older. It gets tougher as you get older. … I’d love to have 10 in there if I could, but you know that won’t happen. To have one who has a chance. To win it with him, it’s a Cinderella story, he’s just a blue-collar horse, just digging in. He reminded me of Silver Charm. … It’s another Kentucky Derby dream that came true.”

The obvious question following the Derby triumph is the Pimlico question: on to the Preakness?

“He came out of it well. It takes about a week to determine, so I’m going to come back next weekend and see,” Baffert said. “But I don’t see anything discouraging right now.  Concert Tour worked well this morning (five furlongs in 1:00.60 at 5:50), I’ll sit down and talk to Mr. (Gary) West. He wants that horse to develop and we’re not rushing things. We know he’s a good horse, so we’ll see next week how he is. The thing is how they’re training. They both would have to be training well.”

“It was a wild experience being in the Derby for the first time,” Cox said. “In every previous Derby I’ve attended, I’ve been a fan. I’ve seen the media interviews, the playing of ‘My Old Kentucky Home’ and everything leading up to the race. Being in the race, all of those things are sort of a blur. You’re so focused on the job at hand. We were so grateful that both of our horses ran as well as they did. Essential Quality got a tough trip being so wide but coming that close to a Derby win makes me want more. We’ll be back.”

HOT ROD CHARLIE (Third) – The Oxbow colt came out of his Kentucky Derby experience physically fine and likely mentally stronger after missing by a length in his third-place finish behind winner Medina Spirit. He’ll be headed back to his Southern California base Tuesday, according to his conditioner, Doug O’Neill.

The trainer had nothing but good things to say about his charge’s try under a solid ride by Flavien Prat.

“We’re just so proud of his effort,” O’Neill said Sunday morning. “He ran a great race. He ate up last night and jogged fine this morning. It was all good.”

The trainer, who’ll catch a plane west Sunday morning, said a start in the Preakness Stakes in two weeks is not in the plans for “Charlie,” who – with his $300,000 share of the Derby purse -- now sports a bankroll of $1,305,700 after eight starts.

“We’ll look to run him next in the Belmont Stakes (June 5 at New York’s Belmont Park),” O’Neill said. “We’ll get him back to California and start planning for that.”

“We’re so proud of our horse,” Foley said. “He came out of things good and we’ll see what the plans are next. It’s been a fun road to get to the Derby. We had a real chance and our horse showed up.”

“He came out of it well,” jockey David Cohen said Sunday after Keepmeinmind had rallied widest of all from last in the field of 19 to miss getting a check by three lengths. “He ran back to how we want him to; he relaxed will and finished up strong. Without having to tip out and the loss of ground, he would’ve ran fifth.”

Plans for a next start are to be determined.

HELIUM (Eighth)/SOUP AND SANDWICH (19th) – Trainer Mark Casse’s assistant David Carroll reported their Derby duo of Helium and Soup and Sandwich were both back in Barn 36 at Churchill Downs and doing fine after the 1 ¼-mile affair.

“Thankfully both horses came back fine,” Carroll said. “Soup and Sandwich displaced during the race but was doing well this morning. I thought Helium ran his race and did well.”

KNOWN AGENDA (Ninth)/SAINTHOOD (11th)/BOURBONIC (13th)/DYNAMIC ONE (18th) –– Trainer Todd Pletcher was at Barn 42 early Sunday morning to continue on with the business of training his substantial stable. He did note that his Derby quartet all came out of their Saturday efforts no worse for the wear and that they’d be headed back to his New York headquarters at Belmont Park Monday. He further said that he’d be headed that way today.

Known Agenda, Sainthood, Bourbonic and Dynamic One failed to make much dent in the 19-horse Kentucky Derby lineup and the trainer said he’d watched several replays of the mile-and-a-quarter classic.

The only one of his runners that Pletcher felt was the victim of some unfortunate racing luck was Known Agenda, who broke well, but then was quickly shuffled back along the rail by a pack of horses and had to fight traffic and kick-back for the rest of the run.

Would he consider the Preakness Stakes in Baltimore in two weeks for any of his Derby horses? “That’s not my MO,” the conditioner stated. “We’ll get back to New York and regroup. Then we can think about some major decisions with those horses.”

Pletcher was asked about the possibility of his stellar filly – Kentucky Oaks (GI) winner Malathaat --possibly taking on the boys in the 1 ½-mile Belmont Stakes on June 5.

“We’re not sure about that one yet,” he said. “She’s a special filly and appears quite capable of running the distance. At some point this year she’s likely to take on the boys, but we’re still not sure where or when that might be.”

It is recalled that in 2007 Pletcher won the Kentucky Oaks with his star filly Rags to Riches. Then he trained her for the next five weeks for a go at the boys in the Belmont. The result was one of the great renewals of that historic classic with the filly surging to the front in mid-stretch, being taken on by the husky colt and future two-time Horse of the Year Curlin and fighting back to hold him off by a head in an absolute thriller. In a touch of irony, Curlin, it should be noted, is the sire of Malathaat.

LIKE THE KING (12th) – M Racing Group’s Like the King returned to trainer Wesley Ward’s main base of operations at Keeneland Saturday night following his 12th-place finish in the Kentucky Derby.

“He came back great and it was a great experience,” Ward said, adding via text that Like the King’s next venture likely would be on the grass in five to six weeks.

“He came back great, but he looked tired last night,” Oliver said via text and indicating Hidden Stash would be getting a break for the time being. “He ran his race. Horses were in front of him and there was nowhere to go.”

BROOKLYN STRONG (15th) – Brooklyn Strong exited his 18th-place finish well, but wasn’t wasting anytime getting back to his Bensalem, Pennsylvania, base. Trainer Danny Velazquez said the colt was leaving Sunday morning and would be pointed toward the Belmont Stakes June 5.

“I know it’s crazy, but we never got a good showing,” Velazquez said. “Slow break and then he got banged back to almost last. It’s tough with 19 horses. No regrets. I had a great experience and we made it to the Derby with a $5,000 horse.”

ROCK YOUR WORLD  (17th) – The California-based colt’s Derby dreams began and ended just a few jumps out of the starting gate Saturday when he was seriously squeezed from both sides out of the 15 hole and forced to fall far back in the big field.

“We had no chance after that,” trainer John Sadler noted Sunday morning at Barn 43 on the Churchill Downs backside.

Rider Joel Rosario tried to get his Candy Ride colt back in the hunt initially, but it quickly proved futile and in the end they wound up finishing 17th in the 19-horse field.

“Disappointing is the word,” Sadler added, discouraged by the fact that his horse never got a chance to run his race.

Assistant trainer Juan Leyva, who has worked at Sadler’s side for the past four years, reported that “Rock” ate up fine last night and walked the shedrow with no problems Sunday morning.

“We just got left with a feeling of uncertainty,” Leyva said. “It was so sad that we never got a chance to see what he could do.”

Sadler, who’ll be jetting back to California Sunday with his main owner, Kosta Hronis, said Rock Your World would fly back to his barn at Santa Anita Tuesday.

“We’ll get him home and regroup,” Sadler stated. “At this point I don’t know what we’re going to do with him. But we’ll come up with a plan.”

Joining the Derby colt on the plane west will be the stable’s super steady sprinter Flagstaff, the 7-year-old gelding who ran a thriller Saturday on the undercard and came away a very game photo-finish winner of the Grade I Churchill Downs Stakes at seven furlongs. The old pro by champion sprinter Speightstown enhanced his career mark to seven wins, six seconds and three thirds in 19 starts. His career earnings now stand at $991,585.