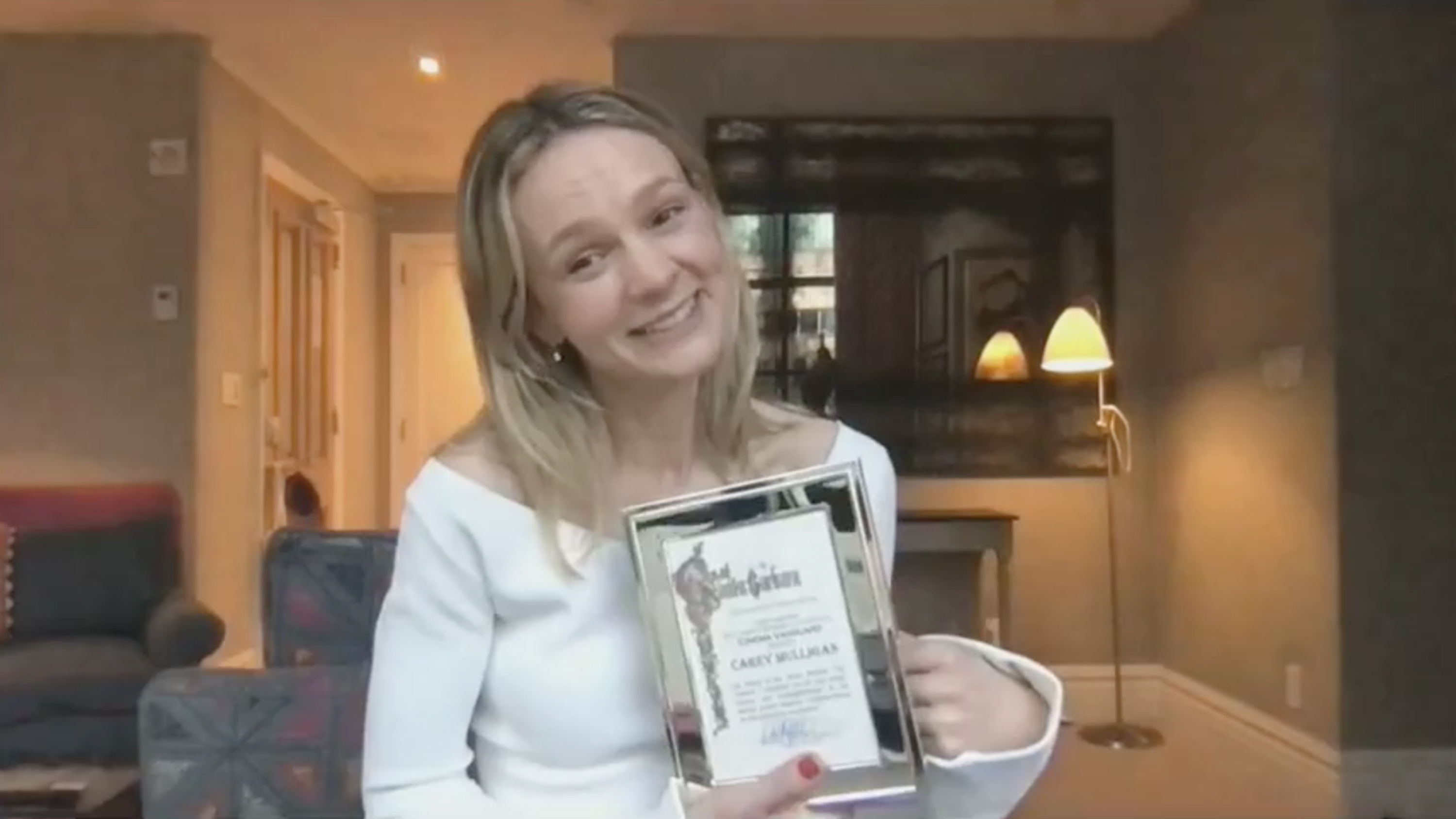 Day 6 of the 36th Annual Santa Barbara International Film Festival presented by UGG featured a tribute to Carey Mulligan, who received the Cinema Vanguard Award. Mulligan was honored for her remarkable career and most recent performance in Focus Features' dark comedy Promising Young Woman written, produced and directed by Emerald Fennell (Killing Eve, The Crown). Mulligan's performance in Promising Young Woman has already garnered her significant awards recognition, including Best Actress from the National Board of Review, the Los Angeles Film Critics Association, and over 20 national and regional critics groups around the country. She has also received nominations for Best Actress from the Golden Globes, Screen Actors Guild®, and the Critics' Choice Association.

Mulligan virtually sat down with Deadline's awards columnist, Pete Hammond for an in depth discussion about her career film, television and on the stage.

On taking on such a well known character like Daisy in The Great Gatsby: "I think I was lucky in that I'm not American, so it's not the school required reading when you're a teenager in England...So in that way, I think I was a little bit protected and I deliberately didn't watch any other versions of it, for free of just copying people. But I think I was so fascinated by who Daisy was based on...The era was fascinating and this relationship... She was just such a curious character and I wanted to figure her out...I found the part just absolutely fascinating...Someone who's a flawed individual and trying to figure her out and figure out this obsession with the past."

On working with Leonardo DiCaprio: "The thing about Leo, particularly as my scene partner a lot of the time, is that I think a great actor is great on screen and he is a true star and a brilliant actor but what he does that he doesn't need to is amazing, like every time the camera is off him and it's on someone else he is as committed and as brilliant as he is when the camera is on him and that just gives you so much as an actor to play with. When Leonardo DiCaprio is off camera and he is incredible, it raises your game... It was a complete dream come true working with him."

On having to cook onstage for a role on Broadway: "I have not had bolognese since, I really haven't...The second time I did the play, we did it in London and then we did it on Broadway for 12 weeks and I was like 4 months pregnant by the time we started the run and having eat and to make the bolognese on stage every night - it just finished it for me. I can't ever again. I don't cook either so that's the most cooking I've done in years."

On fighting to be in Shame: "I made sure that Steve [McQueen] knew how passionate I was about it and was very very keen and eager in our meeting to the point where I sort of jumped in a taxi with him to SoHo, just because he sort of kept trying to end the meeting, he was like 'Well, it was really nice to meet you' and I was like, 'Well, where are you going? What are you doing now?' and he was like, 'Well, I've got to go to SoHo for a meeting and I was like 'Me too, let's go! I'll come with you!' and in the cab ride I was like 'Well, here's the reason...I know that you might not expect me to do this part but..." and I just wouldn't leave him alone and I think he sort of eventually tired of me badgering him."

On filming the drunk scene in Wildlife: "It's definitely the thing you read in the script and think like 'oh no...' you know, because it could just turn out so badly...Paul Dano is just such an incredible director...He gave me so much freedom in that scene and I was kind of beating myself up...I was cutting myself a lot, which is the worst habit ever...I kept getting halfway through a seen and saying 'Cut! Cut!'...When it came to the drunk stuff...we shot all at night, it really was like two in the morning and the stuff that's going on in the scene for her is just so sad..it's like you say she's not a bad mother...everyone's allowed to sort of fall off the rails a little bit...Paul created a set that where you could do anything and there was no judgment and that's what he's so brilliant at.

During Mulligan's conversation with Hammond, guests enjoyed clips from her acting career, including An Education, Never Let Me Go, Shame, The Great Gatsby, Suffragette, Far From the Madding Crown, Mudbound, Wildlife, The Dig and Promising Young Woman.

Following Mulligan's conversation with Hammond, Laverne Cox presented her with the Cinema Vanguard Award. Laverne opened her remarks by saying: "Carey's work has always been so subtle and understated, dialed in and deeply committed to the truth. Moment to moment work exposing the complicated humanity of every character she plays. Getting to witness that process up close was so incredibly rewarding. I love actors that can find subtleties and nuances in just a look and Carey does just that. Carey is known as a dramatic actress but she's also adept at comedy; there was so much levity on set. Carey's range is infinite and perhaps the greatest testament to the impact of art is how the public responds...the empathy and humanity at the core of Carey's performance providing catharsis and healing all over the world who see their stories in Cassie. "

Upon accepting her award, Mulligan said to Laverne: "Laverne, thank you so much for presenting me with this. It means a huge amount, not only because I'm just an enormous admirer of your work as an actress but also because of the way that you stand for things that matter to you within your work and in your life."

Upcoming live conversations and tributes will include presentations to Sacha Baron Cohen, Amanda Seyfried, Delroy Lindo and many more. All films are available online now and a schedule of films at the drive-in, as well as a full schedule of events including where fans can purchase 10-day festival passes now through April 10 can be found by visiting www.sbiff.org.