LA To Do: Freeform Celebrates The '90s With Amoeba, Dippin' Dots & Steve Madden 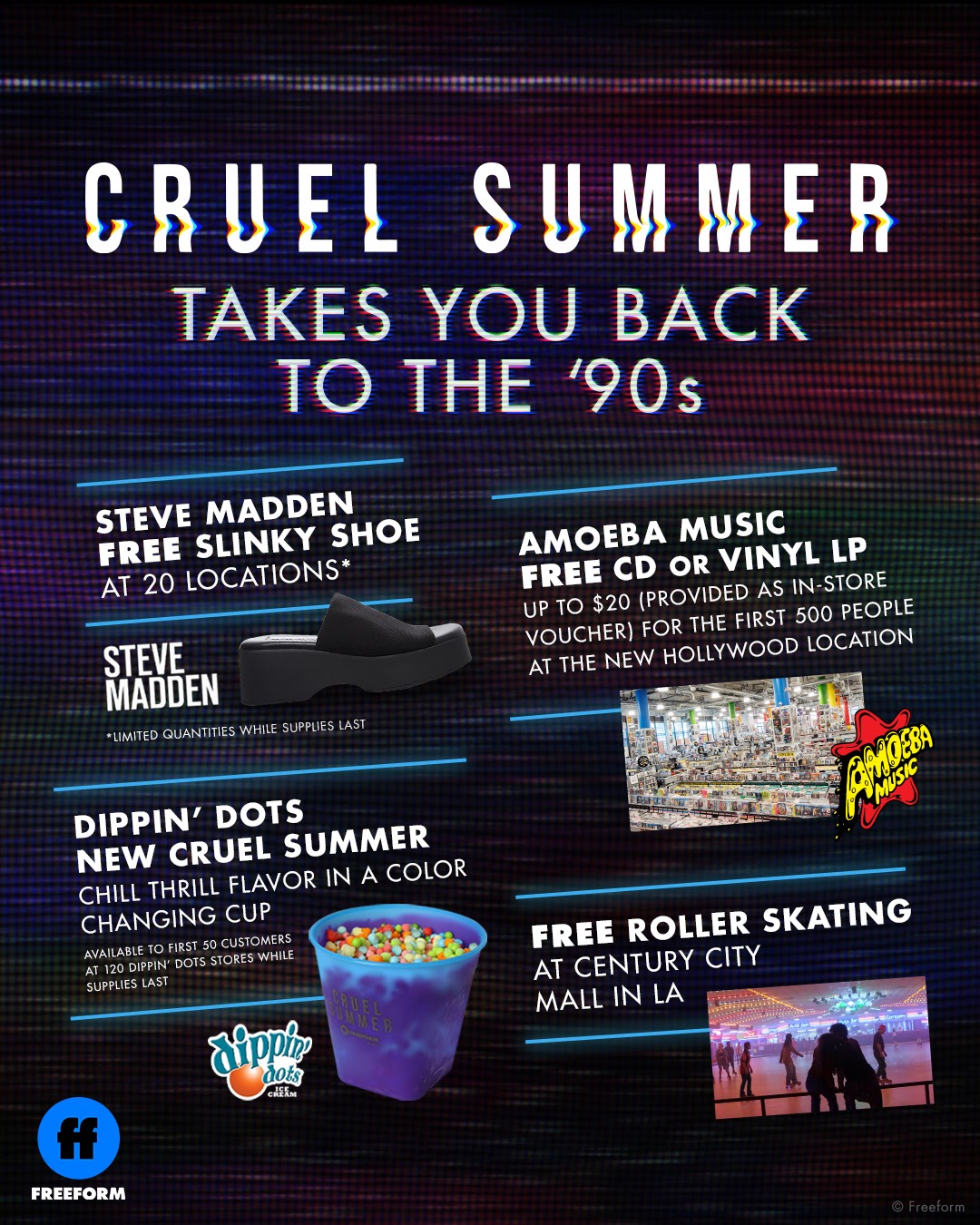 Freeform is bringing back the '90s with a series of marketing activations across the nation on April 24th, 2021 to celebrate the premiere of the new, highly-anticipated series, Cruel Summer.

From the executive producer, Jessica Biel, comes the chilling story of one girl, Kate Wallis, who goes missing. And another girl, Jeanette Turner, who mysteriously takes over her life. Told over 3 summers in the '90s, Cruel Summer will leave you torn between who to believe and what 'the truth' even looks like. Because the deeper you go in this mystery, the darker it gets. In this twisted tale, the truth is how you see it. CRUEL SUMMER will premiere with a two-hour event on Tuesday, April 20 at 9:00 PM EDT/PDT and will be available the next day on Hulu. After the series premiere, new episodes will air Tuesdays at 10:00 PM EDT/PDT.

Fans will be immersed in the '90s with giveaways from iconic brands including Dippin' Dots, Steve Madden, and Amoeba Music, along with a special Instagram sweepstakes and a '90s-themed roller skating event at Westfield Century City.

To celebrate the Cruel Summer '90s Day, 120 Dippin' Dots stores across the nation will offer the first 50 fans a free, 10 oz serving of the limited edition "Cruel Summer Chill Thrill" flavor. The flavor is a combination of rainbow ice and cotton candy and will be served in a custom, '90s themed, color-changing cup. Fans will also receive a '90s style Cruel Summer branded scrunchie.

At Amoeba Music's new Hollywood location on Saturday, April 24th, the first 500 fans will receive a free $20 voucher to buy a '90s vinyl or CD of their choice. The first 500 fans will also receive a free Cruel Summer '90s choker necklace. Amoeba will be spinning a custom playlist featuring artists that can be heard in Cruel Summer and more '90s faves.

The Cruel Summer '90s Roller Rink will take place at the Westfield Century City Mall Atrium on April 24th and 25th. Fans can expect to have a chance to score '90s-inspired Cruel Summer swag, discover easter eggs from the show hidden throughout the activation, and other surprises and delights.

Fans who are not able to attend in-person giveaways can still participate in the Cruel Summer '90s Day through a special sweepstakes on the Freeform Instagram account and '90s themed accounts @90sanxiety, @iamthirtyaf, and @forever_90s_fan. Fans can enter for a chance to win a '90s-themed prize pack including a you-go-girl necklace, roller skates, a Garbage band t-shirt, a cassette tape player, a pair of Steve Madden SLINKY shoes, an Amoeba Music gift card, a Dippin' Dots gift card, and a Caboodle.

NO PURCHASE NECESSARY. Void where prohibited. Open only to persons, who are, as of entry, 18 years of age and older (or age of majority in their state of primary residence, whichever is older), legal residents of, and physically located within, the 50 states of the U.S. or D.C. Entries must be received between 11:00am PT on 4/24/21 and 11:59pm PT on 4/28/21. Get friend's permission to tag. Click here for full Official Rules and entry details.

FYI
The OC FAIR Is Back This Summer!