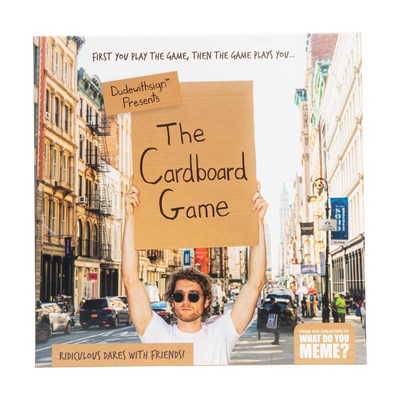 He became an Instagram sensation... just a dude with a sign that said clever things. Now... he's a brand and a boardgame.

Dude with Sign's The Cardboard Game is available exclusively at Target stores and Target.com. Dude with Sign has taken the internet by storm since Seth Philips took to the streets of New York in 2019 with a cardboard sign that read, "Stop replying-all to company-wide emails." He posted it on the @dudewithsign Instagram account and rose to immediate viral star status, amassing a 7.5 million-strong following for his documentation of other relatable and funny everyday sentiments.

Packed with ridiculous dares written by Seth (@dudewithsign himself) along with the What Do You Meme? team, this adult party game guarantees a night of hilarity that you and your friends won't soon forget (or live down)! With 300 Dare cards and 50 Wild cards, no two games are ever the same.

"The early feedback on Dude With Sign's The Cardboard Game has been so exciting to see. We're happy we've been able to tap into something that resonates with so many people," says Ben Kaplan, Partner of What Do You Meme?®.

Sports
NFL Is Getting Into The Podcast Game With iHeartMedia