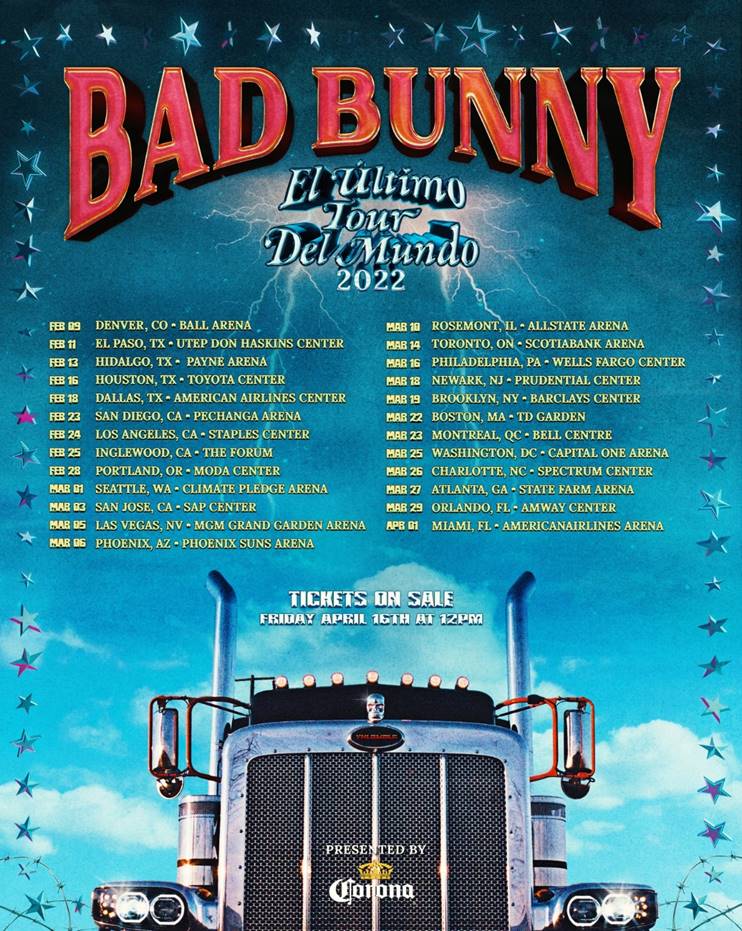 International superstar, GRAMMY® and multiple Latin GRAMMY® winner, Bad Bunny, will make his return to the stage following the announcement of his North American tour, "El Último Tour del Mundo 2022." The highly anticipated tour, promoted by Cardenas Marketing Network (CMN), will be presented by Corona® and will visit a total of 25 cities, beginning February 9, 2022 in Denver, CO at the Ball Arena. Presented by Corona®, tickets for "El Último Tour del Mundo 2022" will go on sale to the general public on Friday, April 16th, at 12pm local time through cmnevents.com.

Bad Bunny's plans to continue touring the world with his music last year were brought to a halt due to COVID-19. His last tour the "X100PRE Tour" was one of the most prominent live shows of 2019, breaking capacity records and completely selling iconic arenas around the world including Madison Square Garden in New York City, STAPLES Center in Los Angeles, American Airlines Arena in Miami, Coliseum of Puerto Rico, Movistar Arena in Chile, Arena México in Mexico City and many more. The tour concluded with 48 fully sold-out shows around the U.S., Latin America, and Europe; and also included Coachella and Lollapalooza festivals.

As we approach the return of live music, Bad Bunny prepares to deliver some of the most astonishing shows of his career, where he will finally be able to interact with his fans in person and bring to life the incredible world he has created with all of his latest revolutionary musical productions such as "YHLQMDLG," "Las Que No Iban A Salir" and "El Último Tour del Mundo." Proclaimed one of the world's leading artists, the multi-platinum recording artist promises to deliver a momentous production that will undoubtedly create unforgettable moments for his fans.