California Rain Storm: How Many Inches Will Fall? 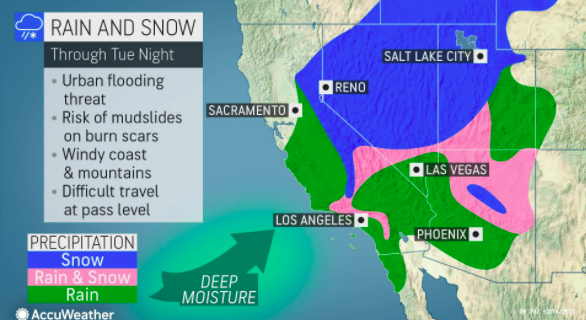 A storm already responsible for travel-snarling snow in the mountains and drenching rain in the lower elevations much of the Pacific Coast states this past weekend will focus its onslaught on the Southwest and Southern California, in particular, into Tuesday night.

The storm currently bringing rain and snow to the West Coast, and perhaps another that follows next week, will likely be the most disruptive in terms of creating travel concerns and producing the greatest risk of mudslides. But the overall pattern is good news for drought concerns as storms line up like a parade over the northern Pacific Ocean, AccuWeather meteorologists say.

Through Monday morning, local time, the storm had already dropped 1-2 inches of rain on the San Francisco Bay Area and about an inch or so of rain on the Sacramento Valley. Snow was piling up at the rate of a few inches per hour over the high country of the Sierra Nevada.

When this particular storm is all said and done, about 2-4 inches of rain will have fallen on the San Francisco area with 2 to perhaps 4 inches in parts of the Sacramento Valley. In the central Sierra Nevada, a whopping 2-4 feet of snow will pile up with local amounts to 6-8 feet over the highest elevations by Tuesday night. The rate of snow may vary significantly and could range from light and intermittent one hour to as much as several inches per hour the next.

Lifestyle
Play In the Snow In Big Bear This Holiday Season

Film
HBO Acquires TONY HAWK: UNTIL THE WHEELS FALL OFF

Lifestyle
Zillow Says Tampa Is The Top Housing Market For 2022