Stand Up To Cancer® (SU2C) announced today the launch of a new public service announcement (PSA) campaign, in collaboration with Academy, Emmy® and Grammy® Award-winning artist, actor, activist and SU2C Ambassador Common, and with support from Bristol Myers Squibb. The PSA raises awareness for lung cancer research and clinical trials. Lung cancer is the leading cause of cancer death among both men and women in the United States and represents nearly 25% of all cancer deaths.

In the new broadcast PSA, Common highlights the profound impact lung cancer continues to have on the Black community. The hopeful, empowering and educational campaign addresses the importance of screening and treatment options, including cancer clinical trials. The campaign will come to life across print, digital, radio and out-of-home media, with the print and radio PSA being released in both English and Spanish-language.

"In 2014 my father died after his battle with cancer," said Common. "He was truly someone who inspired me and made me want to be better. I believe that we can do better for ourselves - especially as Black men when it comes to health. I'm honored to support Stand Up To Cancer's campaign to bring awareness to lung cancer research."

This new campaign is the latest effort from Stand Up To Cancer that is being supported by Bristol Myers Squibb, who has provided funding for important SU2C research initiatives since 2014. Both organizations are committed to promoting and improving health equity in medically underserved communities. This awareness campaign was supported by a $5 million grant awarded to SU2C from Bristol Myers Squibb last year to help fund research and education efforts aimed at achieving health equity for underserved lung cancer patients, including Black people and people living in rural communities. In 2020, Bristol Myers Squibb awarded Stand Up To Cancer a total of $10 million in grant funding to support lung cancer research.

"More than 235,000 new cases of lung cancer will be diagnosed this year in the United States and research shows there are stark disparities in lung cancer diagnoses among diverse and rural communities," said Sung Poblete PhD, RN, CEO of Stand Up To Cancer. "Stand Up To Cancer is committed to saving lives by accelerating cancer research and reducing barriers to clinical trial participation in medically underserved communities. We are thankful to Bristol Myers Squibb for their collaboration to support our efforts in lung cancer research and to Common for lending his voice and support to this important campaign."

Despite recent progress in treating lung cancer, the disease remains the leading cause of cancer death in the U.S. with particularly high death rates in rural communities and among Black men. Each year, over 25,000 Black men and women in the U.S. will be diagnosed with lung cancer. Black men are about 15% more likely to develop lung cancer than white men.

"Our mission at Bristol Myers Squibb is to transform lives through science, but that also means ensuring that all people affected by cancer can equally benefit from the latest science and treatments," said Wendy Short Bartie, senior vice president, US Oncology, Bristol Myers Squibb. "By bringing visibility to lung cancer inequities and encouraging diversity in clinical trials, this PSA will take an important step toward eliminating the dangerous disparities that exist for many underserved lung cancer patients. That's why it was a clear fit for us to continue our longtime support of Stand Up To Cancer by aligning on this effort." 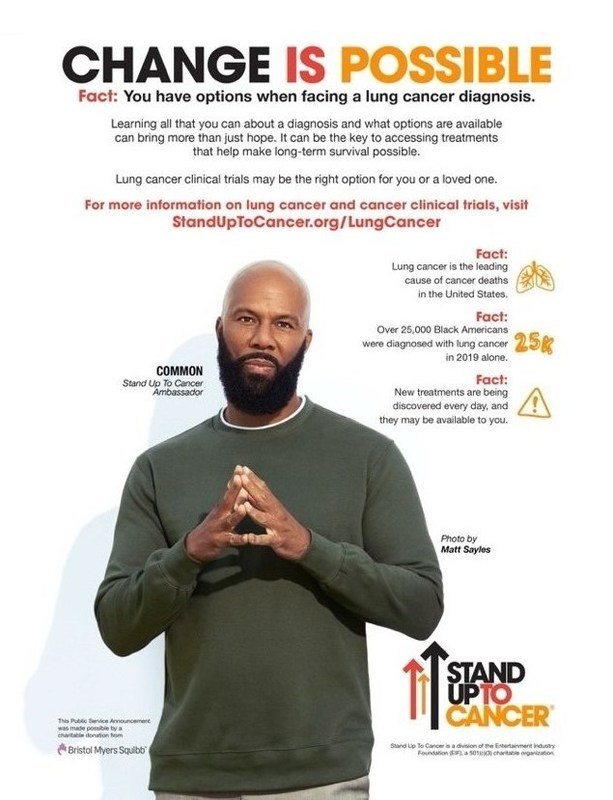 The broadcast and radio PSAs were developed by SU2C and production studio Society. The print campaign was produced by SU2C with photography by Matt Sayles.

This campaign is the latest in a series of PSAs by SU2C to increase awareness about the importance of cancer screenings and clinical trials in medically underserved communities. SU2C formally announced its Health Equity Initiative in January 2020. To date, the initiative has focused on increasing diversity in cancer clinical trials, initiating advocacy group collaborations and awareness campaigns, and funding research aimed at improving cancer outcomes and screening rates in medically underserved communities.

To learn more about this PSA visit, StandUpToCancer.org/LungCancer.