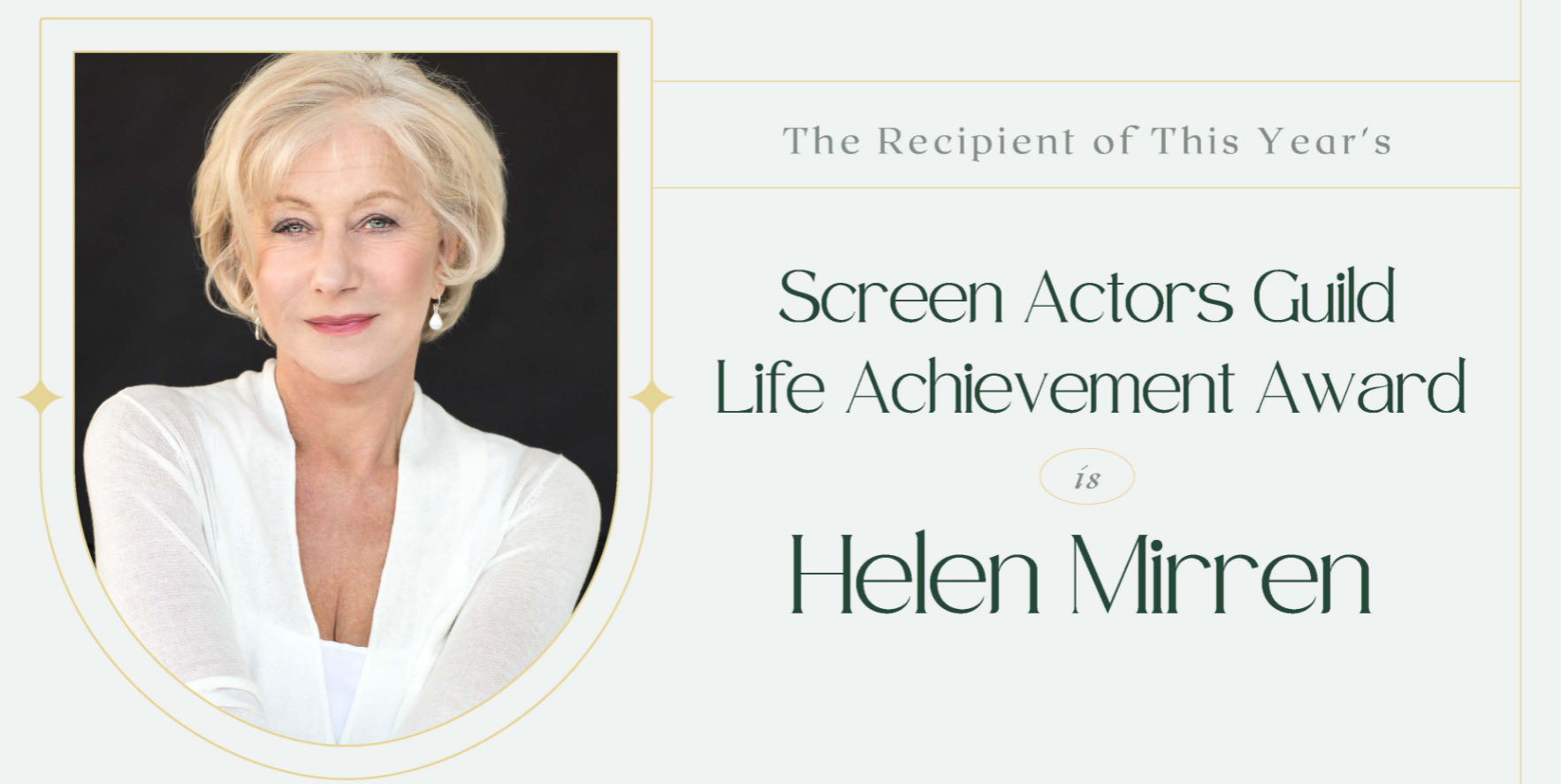 SAG Award® and Oscar®-winning actress Helen Mirren has been named the 57th recipient of SAG-AFTRA's highest tribute: the SAG Life Achievement Award for career achievement and humanitarian accomplishment. Mirren will be presented the performers union's top accolade at the 28th Annual Screen Actors Guild Awards, which will be simulcast live on TNT and TBS on Sunday, Feb. 27, 2022 at 8 p.m. ET / 5 p.m. PT from The Barker Hangar in Santa Monica.

Given annually to an actor who fosters the "finest ideals of the acting profession," the SAG Life Achievement Award will be the latest of Mirren's esteemed catalog of international industry and public distinctions recognizing her masterful performances on stage, screen and television. Her previous honors have included an Oscar, multiple SAG Awards, three Emmys®, numerous BAFTA Awards, a Tony Award®, a BAFTA Fellowship Award, The Film Society at Lincoln Center's Chaplin Award, and she was made a Dame of the British Empire in 2003. To date, Mirren is the most decorated SAG Life Achievement recipient with a total of 13 SAG Awards nominations and five SAG Awards Actor® wins.

Mirren is currently filming Golda in the title role of Golda Meir. She is also set to host Harry Potter: Hogwarts Tournament of Houses, a four-part competition series premiering on Sunday, Nov. 28 at 8 p.m. ET/PT, on TBS and Cartoon Network.

SAG-AFTRA President Fran Drescher said, "Dame Helen Mirren is quite simply a brilliant and luminous talent. Her work runs the gamut of characters from a not-so-retired CIA super-killer and a ruthless Russian spy handler to a Hungarian cleaning lady and the most exquisite Elizabeth II. She has set the bar very high for all actors and, in role after role, she exceeds even her own extraordinary performances. I've always felt a kinship with Helen. She's the Queen of England and I'm the Queen of Queens. She won an Oscar and I'm left-hander of the year. It's uncanny. And, it is my deep, personal honor to be the first to congratulate Helen as the 57th recipient of the Screen Actors Guild Life Achievement Award. Bravo, my dear!"

"I am honoured to have been chosen to receive the SAG Life Achievement Award," said Mirren. "Since I was a young actor starting out, I have always been inspired by and learned from American screen acting, so this award is particularly meaningful for me."