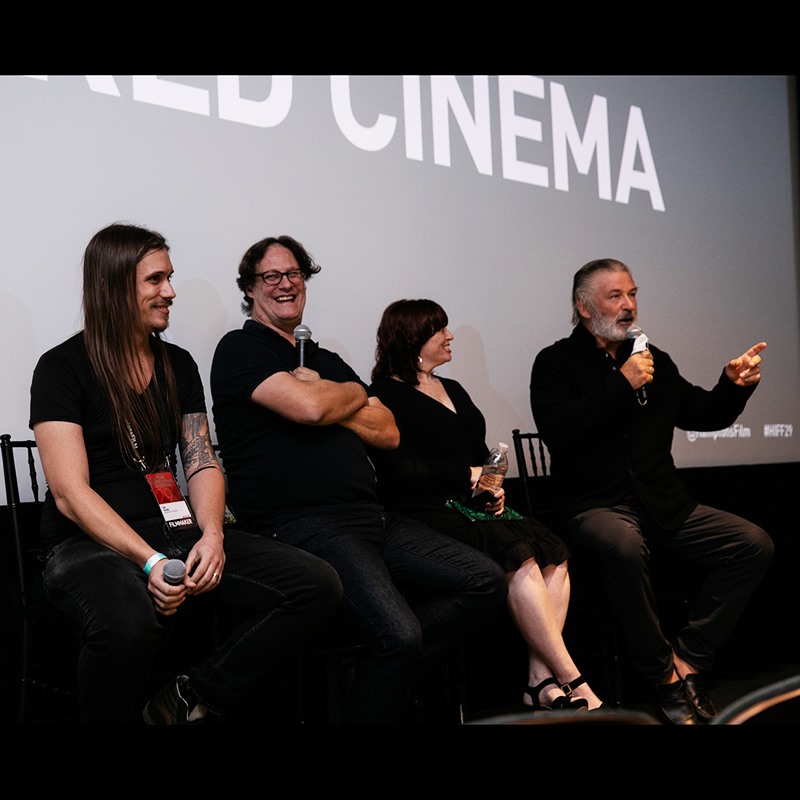 The 29th Hamptons International Film Festival, presented by HamptonsFilm, today announced their award winners at a ceremony in East Hampton.  This year HIFF screened 61 films from 34 countries, with five (5) World premieres, two (2) North American premieres, and two (5) U.S. premieres. We are very proud to report that 53% of this year's films were directed by women, and 36% were directed by filmmakers of color.

In addition, Franz Rogowski received a Special Jury Prize for Exceptional Performance for his work in GREAT FREEDOM "GROSSE FREIHEIT."

BAD OMEN, directed by Salar Pashtoonyar, was awarded the 2021 The Peter Macgregor-Scott Memorial Award. The award, which is accompanied by a $10,000 cash prize, aims to continue the celebrated producer's mentorship for a new generation of passionate filmmakers. Sponsored by Susan Macgregor-Scott, this award is specifically designed to recognize narrative short filmmakers and reward creative approaches to solving practical production challenges in the service of storytelling.

PAPER & GLUE, A JR Project, was awarded the 2021 Brizzolara Family Foundation Award to Films of Conflict and Resolution, which is accompanied by a $5,000 cash prize.

PAPER & GLUE was also presented with the Victor Rabinowitz & Joanne Grant Award for Social Justice.  The annual award is handed to a film that exemplifies the values of peace, equality, global justice and civil liberties, and is named after iconic civil rights lawyer Victor Rabinowitz and his wife Joanne Grant, an author, filmmaker and journalist. The award, which is accompanied by a cash prize of $2,000, is named in honor of two people who spent their entire lives fighting for those values.

GOOD GRIEF, directed by Nastasya Popov, was awarded the Suffolk County Next Exposure Grant. This program supports the completion of high quality, original, director-driven, low-budget independent films from both emerging and established filmmakers who have completed 50% of principal photography within Suffolk County. The film was awarded a $3,000 grant.

COW, directed by Andrea Arnold, was awarded the Zelda Penzel Giving Voice to the Voiceless Award. This award is presented to a film that raises public awareness about contemporary social issues, including the moral and ethical treatment and the rights of animals as well as environmental protection. The film was awarded $2,500.

QUEEN OF GLORY, directed by Nana Mensah and INTRODUCING, SELMA BLAIR, directed by Rachel Fleit were awarded the New York Women in Film & Television Awards. These two awards honor outstanding female narrative and documentary filmmakers who have demonstrated exceptional artistic vision and dedication to their craft. Each award is accompanied by a $1,000 cash prize.

This year's narrative competition jury was comprised of producer Sam Bisbee, whose work includes the Emmy Award-winning documentary THE SENTENCE, as well as THE TRUFFLE HUNTERS, HEARTS BEAT LOUD, and FAREWELL AMOR, among others; screenwriter Bill Collage, best known for his work on ASSASSIN'S CREED and THE DIVERGENT SERIES: ALLEGIANT; and Entertainment Weekly's Critic at Large Leah Greenblatt.

The documentary competition jury included co-founder of Chicken & Egg Pictures Wendy Ettinger, whose production company has awarded $8 million in grants and thousands of hours of creative mentorship to over 340 female nonfiction filmmakers; Senior Curator for Staff Picks at Vimeo Ina Pira; and filmmaker Jane Schoenbrun, whose most recent project WE'RE ALL GOING TO THE WORLD'S FAIR debuted in the NEXT section at the 2021 Sundance Film Festival.

This year the Festival was honored to partner with the New York Film Critics Circle for the thirteenth year.

"Being able to once again experience the power of cinema on a big screen with audiences was incredible and something that was dearly missed within our community," said David Nugent, HamptonsFilm Artistic Director. "We are so thankful to all of the filmmakers and artists who allowed us to showcase their films."

"We are thrilled to have the opportunity to bring everyone safely back together this year.  It so clearly remains that our community out East loves cinema and we are so glad to be able to share such an incredible slate of films with them," said Anne Chaisson, HamptonsFilm Executive Director.  "We are so thankful to all of the staff, volunteers, sponsors and most of all to the audiences for their continued support. Next up, our 30th anniversary!"

The festival has awarded prizes to filmmakers in cash and goods and services of over $130,000 each year, with over $5 million awarded in competition funds and services over the past 29 years.

IN FLOW OF WORDS, directed by Eliane Esther Bots

The Zelda Penzel "Giving Voice to the Voiceless" Award

Sam Bisbee, producer, whose work includes the Emmy Award-winning documentary THE SENTENCE, as well as THE TRUFFLE HUNTERS, HEARTS BEAT LOUD, and FAREWELL AMOR, among others;

Bill Collage, screenwriter, best known for his work on ASSASSIN'S CREED and THE DIVERGENT SERIES: ALLEGIANT

Jane Schoebrun, filmmaker, whose most recent project WE'RE ALL GOING TO THE WORLD'S FAIR debuted in the NEXT section at the 2021 Sundance Film Festival.