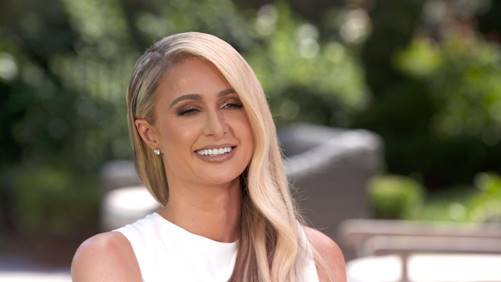 Paris Hilton long gave the world the perception she was a ditzy blonde – a party-hopping socialite riding tabloid headlines and reality TV fame to the bank. Now, however, she says that public image she portrayed was just an act, in an interview with Tracy Smith for CBS SUNDAY MORNING to be broadcast Sunday, Sept. 6 (9:00 AM, ET) on the CBS Television Network.

Hilton, now 39, says that her public image is drastically different from the real Paris Hilton. She also says that she has been hiding the pain of childhood trauma she suffered years earlier.

"There's so many differences," Hilton says between the real Paris and what she portrayed. "With the character, it's mostly kind of this blonde, bubbly, kind of Barbie airhead. And, in real life, I'm the exact opposite. ... I'm not a dumb blonde. I'm just very good at pretending to be one."

Hilton is revealing that other side at the same time "This is Paris," a new film that debuts on YouTube Sept. 14, describes a time in her childhood too painful to talk about. Hilton says she was a teen with a wild streak and that her strict parents sent her to a series of "behavior modification schools." She maintains that, while attending the Provo Canyon School in Utah, she was abused, choked and hit.

In a statement, officials of the Provo Canyon School told CBS SUNDAY MORNING that the facility was sold by its previous owners in August 2000 and could not comment on "the operations or patient experience prior to this time" – adding that they "do not condone or promote any form of abuse."

Hilton tells Smith she never revealed the truth to her family.

"When I got out, I was just so grateful and so happy to be free and to be out of there that I just didn't want to bring it up," Hilton says. "I was like, I'd rather, you know, just never talk about this. Just don't think about it. And the moment I stepped out of that building is when I decided I'm never telling this story to anyone, ever."

But she is telling the world now in a film that she says shows her real personality.

Hilton talks with Smith about her childhood, why she's opening up now, her career and her fashion and merchandise empire. She also ties an infamous 2003 sex tape scandal to that experience years earlier in Utah.

"That would never have happened if I hadn't gone to that school," Hilton says.

"I just feel when I got out of that school, I was so lost," she adds. "And then I ended up meeting the person who did that. And I never would have let someone like that in my life if I hadn't gone through such experiences. And therefore, I would have never put myself in that situation. But I just wanted love so bad. I didn't really know. I was so naïve. And I trusted the wrong person. And that's something I'll regret for the rest of my life."