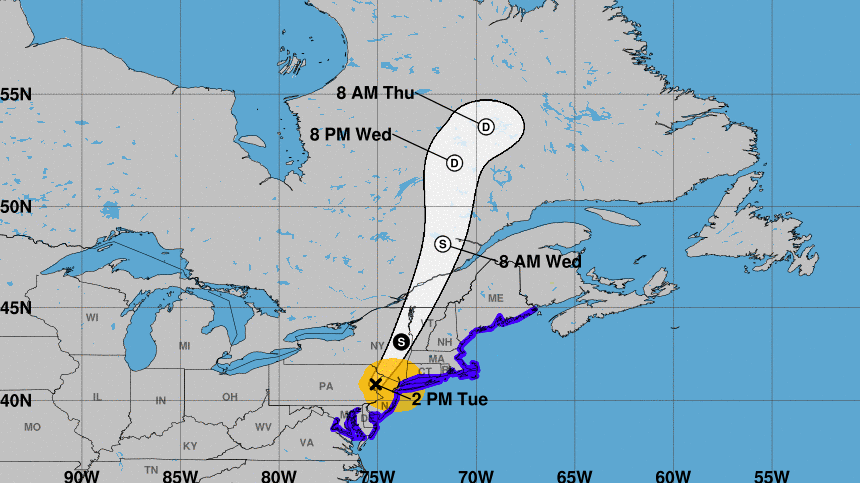 According to reports, Tropical Storm Isaias (ees-ah-EE-ahs) is traveling up the Northeast with damaging winds, flooding rainfall and tornadoes.

Isaias made landfall as a Category 1 hurricane at 11:10 p.m. EDT Monday near Ocean Isle Beach, North Carolina and has made its way to Philadelphia and is moving to the north-northeast at 35 mph.

Rainfall, uprooted trees and damaging winds are hitting New England and all along the coast.

Hurricanes are among nature's most powerful and destructive phenomena, according to NHC. On average, 12 tropical storms, 6 of which become hurricanes form over the Atlantic Ocean, Caribbean Sea, or Gulf of Mexico during the hurricane season which runs from June 1 to November 30 each year.

In the Central Pacific Ocean, an average of 3 tropical storms, 2 of which become hurricanes form or move over the area during the hurricane season, which runs from June 1 to November 30 each year. Guam, the Northern Marianas and Micronesia experience typhoons all year round but the main season in July through November with a peak from mid-August to mid-September. Over a typical 2-year period, the U.S. coastline is struck by an average of 3 hurricanes, 1 of which is classified as a major hurricane (winds of 111 mph or greater).

By knowing what actions to take before the hurricane season begins, when a hurricane approaches, and when the storm is in your area, as well as what to do after a hurricane leaves your area, you can increase your chance of survival. If you, or someone you know, have been a victim of a hurricane, please share your story, including the town and state you were in and the year the event took place.. Please note that NS will then have permission to use your story for educational campaigns. Sharing this information may help save someone’s life in the future. Read stories from survivors and learn how to stay safe.

While hurricanes pose the greatest threat to life and property, tropical storms and depression also can be devastating. The primary hazards from tropical cyclones (which include tropical depressions, tropical storms, and hurricanes) are storm surge flooding, inland flooding from heavy rains, destructive winds, tornadoes, and high surf and rip currents.