How The NBA Bubble Has Taken Shape In Disney Land 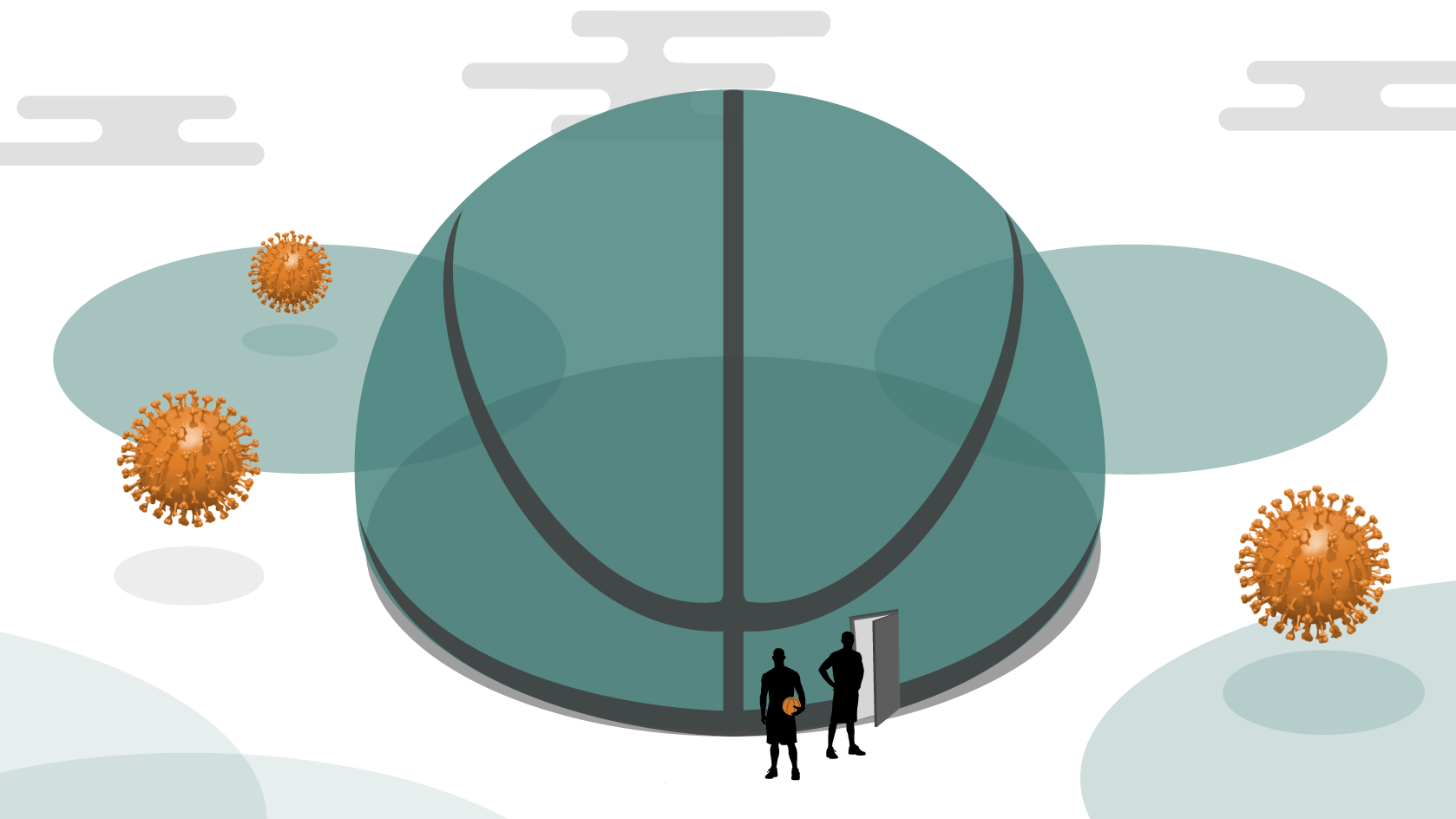 From the relative isolation at the Walt Disney World Resort to dozens of pages of policies and procedures, the NBA is constructing a social bubble in the Orlando area to protect its teams and the 2019-20 season from COVID-19. Overall, health experts have praised the NBA’s return-to-play guidelines. Yet they also expressed concerns, including testing frequency, uniformity of testing kits and length of isolation periods.

Few places could offer the 22 teams and NBA staff as many playing facilities, rooms and amenities with minimal exposure to the public. The NBA's multiyear TV contract with ESPN – owned by Disney – probably didn't hurt either. The resort's 220-acre ESPN Wide World of Sports Complex has more than a dozen practice courts and enough game-quality courts to play and broadcast three games at once, though that's not currently planned.

The 22 teams will each play eight seeding games starting July 30 to determine the final standings and who makes the playoffs. You can search, sort or scroll through all 88 seeding games below.

Scheduling has been one strategy the NBA has employed to reduce the number of potential contacts.

Family and guests won't be welcomed to the resort until the seeding games and first round of the playoffs are completed.

That keeps potentially infected guests outside the NBA's bubble for more than seven weeks. During that time, more than half of the invited teams will be eliminated in the seeding round or playoffs.

The NBA has made a similar calculation with the teams' accommodations.

The teams no longer have home-court advantage. Nor will they have fans in the stands. But they were assigned to one of three deluxe hotels based on the current standings in each conference.

A recent study showed that limiting the connections in a population helps to slow the transmission of a virus.

Just because NBA players, coaches and staff members are inside the bubble, the precautions and advice is generally what the CDC suggests for those of us outside their bubble.

According to the NBA’s 113-page health and safety protocol document, masks are required in every public situation except practices and games.

Even during games, though, most of the people attending will be required to wear some kind of face covering.

In the two weeks before the players traveled to Orlando, the NBA required they had to be tested for the coronavirus.

As they arrived in a staggered three-day period from July 7 to 9, each player was to quarantine in his room for more than 24 hours and complete two negative COVID-19 tests.

After the initial tests, players and staff will "undergo regular coronavirus testing as determined by the NBA in consultation with its medical experts and the (National Basketball Players Association)."

The NBA also says players and staff will be monitored daily:

The NBA says there's no opting out on monitoring for players, staff or guests and says anyone who refuses "will be prohibited from engaging in group activities until the monitoring is accomplished and/or may be required to leave the campus permanently."

Keeping transmission to a minimum

Disney employees will be routinely cleaning public spaces such as elevators, lobbies and handrails.

Disney will also staff takeout restaurants with the same employees to eliminate staff turnover. They will all be required to wear masks and gloves while staying at least six feet apart.

To reduce any other potential transmission during their free time, the NBA even suggests players throwing away a deck of cards after every use.

Planning for the unexpected

“They’re taking the right approach,” UNLV assistant professor of health Brian Labus told USA TODAY in June. "Though they will have some challenges when they actually start to implement it, everything looks good on paper.”

One of the big X-factors in maintaining the NBA bubble is the Disney staff members. They won't be required to stay inside the bubble but will be helping the players, coaches and other staff on a daily basis.

"I don’t think any reasonable person would say that was a real possibility. You’re talking about hundreds, maybe thousands, of workers in these hotels that would never see their family for three months," said Eric Clinton, the president of UNITE HERE Local 362, which oversees the custodians and ride operators at Disney World.

The union and NBA have agreed on multiple safeguards. Said Clinton: "They’re going to be scheduled and trained in a way not to interact with the players as much as possible."

They will also be monitoring and asking the staff to monitor their own health on a daily basis.

So employees do not feel pressured to work with any illnesses, Disney will pay them for sick days. Disney will also pay any employees who have to self-quarantine should they be diagnosed with COVID-19, regardless of where it originated.

Regardless, the NBA said in its health and safety protocols that the league, players union and Disney "will continue to monitor the ongoing coronavirus situation, including as local, state and national public health recommendations evolve, new or different technologies become available (e.g., related to diagnostic testing or contact tracing), and emerging evidence continues to inform best practices for prevention, control, and mitigation strategies."

"We are continuing to work with Disney on the testing of at least a subset of their employees that could potentially be in the same room with our players and anyone else who’s tested daily on our campus," NBA Commissioner Adam Silver said in June. "So we are satisfied that once we work through those additional measures with Disney, we will continue to have a safe setting for us to resume our season."

Lifestyle
If You're Flying, Take These Precautions