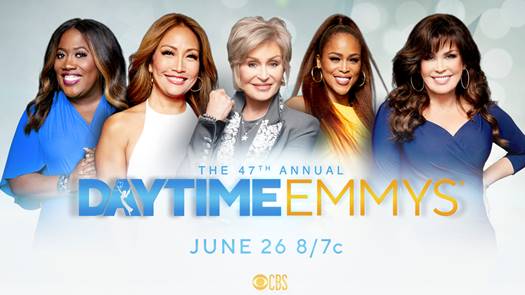 Sharon Osbourne, Sheryl Underwood, Eve, Carrie Ann Inaba and Marie Osmond, the hosts of CBS' Daytime Emmy® Award-winning show THE TALK, announced today during their broadcast that they will host the 47th ANNUAL DAYTIME EMMY® AWARDS, to be broadcast Friday, June 26 (8:00-10:00 PM, ET/PT) on the CBS Television Network. This will mark the 14th time CBS has broadcast the Daytime Emmy® Awards, more than any other network.

The 47th ANNUAL DAYTIME EMMY® AWARDS will feature awards being presented virtually in leading categories, with recipients and other special guests appearing from home in light of the COVID-19 pandemic. Additional categories will be announced simultaneously on Twitter (@DaytimeEmmys), with others presented in a separate ceremony in July.

The Daytime Emmy® Awards have recognized outstanding achievement in daytime television programming since 1974. The awards are presented to individuals and programs broadcast between 2:00 AM and 6:00 PM, as well as certain categories of digital and syndicated programming of similar content. This year's awards honor content from more than 2,700 submissions that originally premiered in calendar year 2019, judged by a pool of 1,000 peer professionals from across the television industry.

The 47th ANNUAL DAYTIME EMMY® AWARDS is produced by NATAS and Associated Television International (ATI), which previously produced Daytime Emmy® Award ceremonies on The CW in 2009 and on CBS in 2010 and 2011. Adam Sharp and Steve Ulrich are Executive Producers from NATAS, while David McKenzie is Executive Producer and Director from ATI.