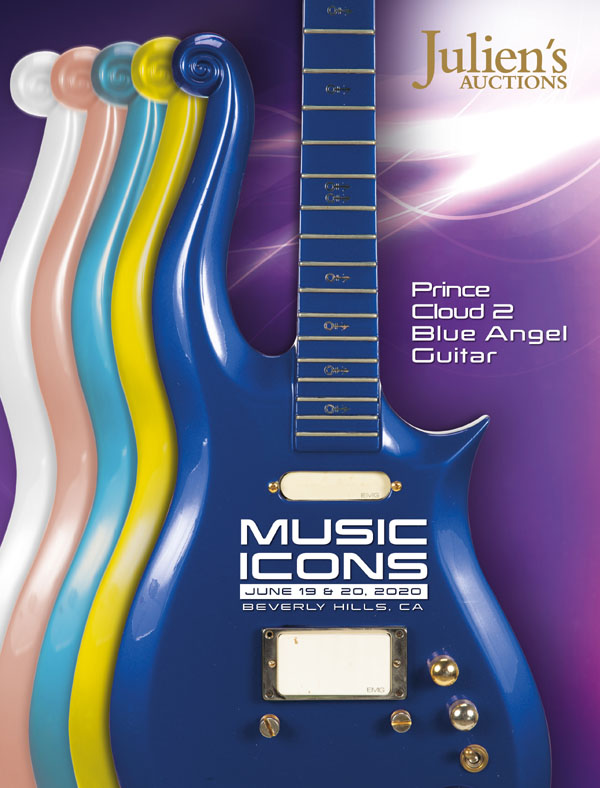 Julien’s Auctions announced today that a historic discovery has been made about their previously announced marquee item in their upcoming Music Icons auction - Prince’s 1984 blue Cloud electric guitar - which has been confirmed to be the seven-time Grammy award winning artist’s long lost "blue angel" guitar. It will be sold at the previously announced MUSIC ICONS to take place on Friday, June 19th and Saturday, June 20th live in Beverly Hills and online at juliensauctions.com.

From 1984 until the time that Andy Beech began making Cloud guitars for Prince in 1993, this was Prince’s primary performance Cloud guitar. It is considered one of the most historically important guitars played by Prince that will ever come up for auction and used during the height of his career in the 1980s and 1990s. The legendary guitar was played by The Purple One in his most iconic career performances on stage and screen including: his tours for "Purple Rain" (1984-1985), "The Parade Tour" (1986), "Sign o’ the Times," (1987), "Lovesexy," (1988-1989) and "Diamonds and Pearls" (1992), Saturday Night Live’s "15th Anniversary Special," (September 24th, 1989), the 1991 MTV Video Music Awards, his legendary 1991 appearance on The Arsenio Hall Show in a 20-minute set that included his performances of "Let’s Go Crazy", "Cream," and "Purple Rain," music videos for "Get Off" and "Cream," as well as photo appearances on the covers of Spin magazine (September 1991) and the film poster for the 1987 music documentary Sign o’ The Times.