Robert De Niro announces today's AFI Movie Club selection: DR. STRANGELOVE OR: HOW I LEARNED TO STOP WORRYING AND LOVE THE BOMB. "Gentlemen, you can't fight in here. This is the War Room!" The film appears on several of AFI's lists of the greatest American films – including #3 on the AFI's 100 YEARS...100 LAUGHS!

Stanley Kubrick ordered 3,000 custard pies for the production. They were to be used in an alternate ending depicting a pie fight between the Russians and the Americans. View exclusive AFI Archive clips of Samuel L. Jackson and Robin Williams talking about their favorite DR. STRANGELOVE moments. 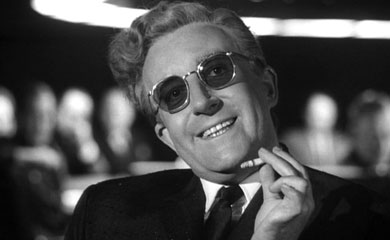