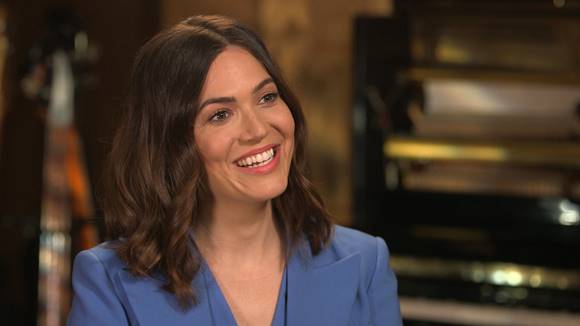 Singer and actress Mandy Moore has had hit records and is now on a hit TV show, but not so long ago, in the wake of a divorce and challenges in getting an acting job, Moore considered walking away, she tells Luke Burbank in an interview for CBS SUNDAY MORNING to be broadcast Sunday, March 1 (9:00 AM, ET) on the CBS Television Network.

In an emotional interview, Moore opens up to Burbank about her career, her new music, and her work on the TV show "This Is Us." Moore, 35, has been in the business since she was 15, first in music with the pop hit "Candy," which led to work for MTV (a subsidiary of ViacomCBS), then movies. She later released five albums before she met and married singer Ryan Adams. She says she thought the relationship would spark her creativity, but it had the opposite effect.

"I just felt like I was at a point in my life where I was the most comfortable making myself the last priority. And I made myself as small as possible in order to make someone else comfortable," Moore says of the marriage, which ended in 2016.

Then, last year, Moore and other women claimed their relationships with Adams were toxic.

By 2015, she tells Burbank, she considered walking away from the business.

"I had done four failed TV pilots," she says. "So I was kind of at the point where I was like, 'Maybe this acting thing is done for me.' Like, 'Maybe I need to hang it up and go back to Florida, go to school, go try my hand at something else."

She didn't, of course, and eventually landed a lead role on the critically praised drama "This Is Us." And now, with her confidence restored, Moore is back making music and touring behind a new album, Silver Landings.

Moore talks with Burbank about her new music; working with her second husband, musician Taylor Goldsmith; and hitting the road for her first tour in a decade.