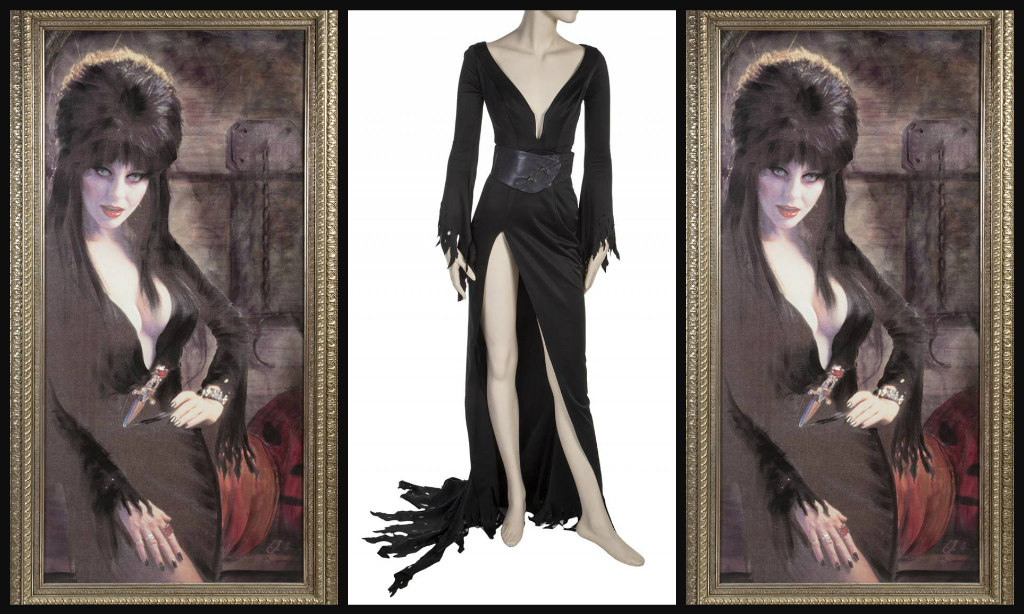 Julien's Auctions has announced its spine-tingling event PROPERTY FROM THE COLLECTION OF ELVIRA, MISTRESS OF THE DARK will take place in October 2021 in Beverly Hills and live online at juliensauctions.com.

The exclusive auction celebration of the career of American actress, writer, singer, pop culture icon and sex symbol, Cassandra Peterson, known the world over as "Elvira, Mistress of the Dark" will showcase a frightful collection of her personal memorabilia, including her signature black gown, props and costumes from her television series and films as well as jewelry, a pinball machine and other Elvira ephemera from the pioneering horror host who was the first ever to be syndicated throughout the U.S. on national television.

Cassandra Peterson began her career in entertainment as a Las Vegas showgirl and appeared in the James Bond film Diamonds are Forever and Federico Fellini's Roma. In 1979, she joined the Los Angeles based improvisational group The Groundlings where she created a California "Valley Girl" character which would evolve into her iconic persona as Elvira. In 1981, Peterson was offered the role of horror host of Los Angeles KHJ-TV's Movie Macabre, a local late-night movie show featuring B horror, sci-fi and genre movies. Peterson's Elvira character attracted immediate attention and raised eyebrows for her tight-fitting, cleavage-enhancing black gown and vampire/punk look. Her campy humor and sexy gothic appearance made her a beloved cult figure with late-night viewers of the show which was soon re-titled Elvira's Movie Macabre. Her popularity soared and the Elvira brand grew into an empire during the 1980s-1990s that included Halloween costumes, comic books, action figures, trading cards, pinball machines, décor, Halloween albums, model kits, perfume, beer, dolls and more. In 1985, Elvira began hosting a successful home video series called Thriller Video with horror and genre films chosen by Peterson which led to a second video set, Elvira's Midnight Madness and the DVD horror-film collection Elvira's Box of Horrors. (photo right: Elvira's original black gown).

In the late 1980s and early 1990s, Elvira-themed computer games Elvira: Mistress of the Dark, Elvira 2: The Jaws of Cerberus and Elvira: The Arcade Game were released. Elvira was also one of the characters in 2007 PlayStation 3 game Pain and in 2017's Call of Duty: Infinity Warfare "Absolution." (photo left: Elvira, Mistress of the Dark film script)

On the radio, Elvira was a personality on LA's KROQ-FM and on the big screen, Peterson produced, wrote and starred in the films, Elvira, Mistress of the Dark (1988) and Elvira's Haunted Hills (2001). The latter film screened at AIDS charity fundraisers across America and made its official premiere in Hollywood where Elvira arrived in her Macabre Mobile, the 1959 Thunderbird from the film, Elvira, Mistress of the Dark. The film would later be screened at the 2003 Cannes Film Festival. In 2010, Elvira's Movie Macabre returned to television syndication in the U.S. and in October 2014, Peterson reprised her role in Hulu's 13 Nights of Elvira.

Highlights of the auction include: one of the three original signature Elvira long black gown costumes used from 1981 – 1986 (estimate: $3,000 - $5,000); a gold wooden framed "oil painting" look portrait of Elvira created by photographer David Goldner and used in several film and TV productions from 1997 – 2010 including, The Search for the Next Elvira, and Elvira's Movie Macabre (estimate: $400 - $600) and more.