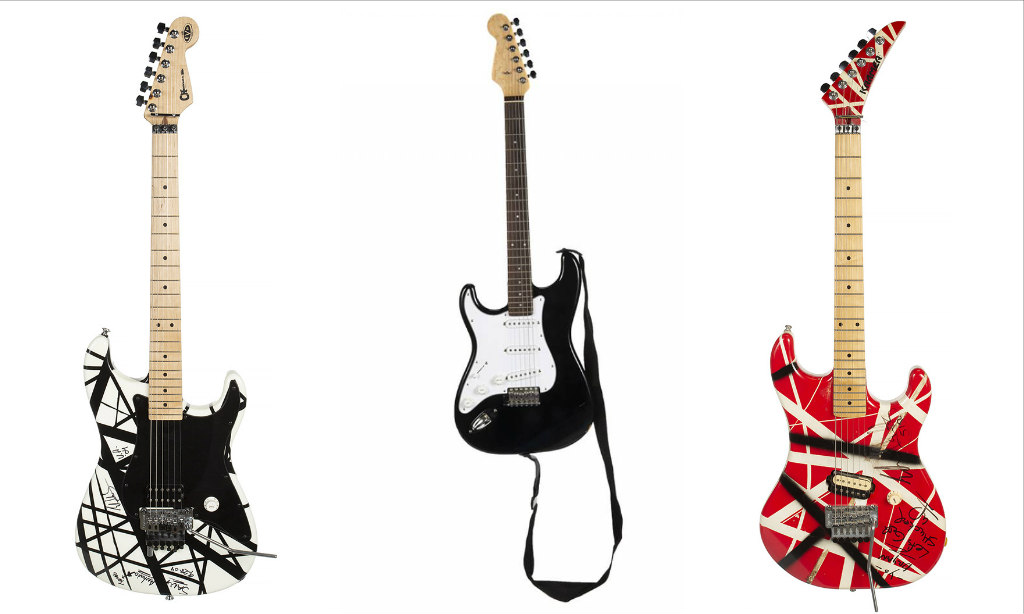 Van Halen hand striped this 2004 EVH Charvel Art Series electric guitar with maple neck and fingerboard, Fender Stratocaster-style headstock numbered on the back #54, in the unique white and black abstract design in the style of his 1978 Van Halen I guitar. The front of the body is signed Eddie Van Halen, initialed VH 04 and inscribed in Van Halen's hand San Antonio Texas / 9-28-04. This guitar also features an EVH humbucking pickup with evidence of a cigarette burn to the front. Accompanying the guitar are multiple photos of Van Halen hand-applying taped stripes to the guitar (seen in photo left), photos of him playing the guitar on stage in San Antonio and an EVH hardshell case with a partly-smoked cigarette in a plastic vial. The EVH Charvel Art guitars are a limited-edition series of guitars inspired by Eddie Van Halen's most famous guitars where each one has a unique body, designed by Van Halen himself.

A customized electric guitar serial number F 0024 built by Van Halen with his guitar tech Matt Bruck at the guitarist's 5150 home studio is another unique and personal favorite from the rock legend. Featuring a red body with white and black stripes designed and applied by Van Halen, the guitar features a maple neck and fingerboard with dot inlays, pointed Kramer headstock with Kramer machine heads, single humbucker pickup and Floyd Rose tremolo (seen in photo right). In 1991, the guitar was gifted to Van Halen's close friend Bryan Cash, the owner of Cash's Centenary Oyster House in Shreveport, LA. It is inscribed Yo - / Bryan / Let's get / shucked / up / Eddie Van Halen / 5150 and was displayed at the bar where it was played by Van Halen when he visited. The guitar also includes a white Van Halen guitar pick and 2 backstage passes, one labelled Bertinelli Guest. Both guitars are estimated to sell each between $40,000 - $80,000.

Van Halen, with lead guitarist Eddie Van Halen, his brother and drummer Alex Van Halen, bassist Michael Anthony and singer David Lee Roth, shot to rock superstardom soon after the release of their 1978 self-titled debut album. Van Halen dominated the music charts throughout the '80s with their classic hits, "Runnin' with the Devil," "Unchained," "Hot for Teacher," "Panama" and "Jump" and played to sold out arenas around the world throughout the decade and into the '90s with singer Sammy Hagar. From his star making guitar solos on Van Halen's "Eruption" to his now iconic contribution to Michael Jackson's "Beat It," the charismatic songwriter and musician is deified as one of the greatest guitarists in rock history and is worshipped by legions of fans, fellow musicians and critics alike. Van Halen was inducted into the Rock & Roll Hall of Fame in 2007. The beloved pop culture icon died on October 6, 2020 at the age of 65 after a long battle with cancer.