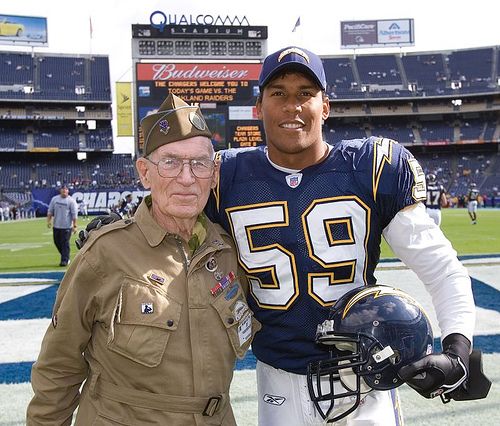 Edwards will be recognized at NFL Honors, a two-hour primetime awards special to air nationally on Feb. 1, the eve of Super Bowl LIV, at 8 PM (ET and PT) on FOX. NFL Honors will be taped earlier that evening at the Adrienne Arsht Center in Miami. USAA, a leading provider of insurance and other services to U.S. military members, veterans and their families, will contribute $25,000 in Edwards' honor to the official aid societies representing all five military branches. The NFL will match USAA's donation of $25,000, which will be donated to the Edwards' military charity of choice.

"Inspired by his grandfather's service in WWII, Donnie has exhibited true appreciation for the sacrifices of WWII veterans and those currently serving overseas," said Vice Admiral (Ret.) JOHN BIRD, USAA Senior Vice President of Military Affairs. "In honor of his very admirable work with those in the greatest generation, USAA is proud to honor Donnie Edwards as the recipient of this year's 'Salute to Service Award presented by USAA.'"

In five seasons with the Chargers, Edwards was twice voted All-Pro at linebacker and, at the time of his retirement, was one of only eight players in NFL history to record at least 20 career interceptions and 20 career sacks. As passionate off the field as he was on the gridiron, community involvement quickly became a staple of Edwards' career. In 2002, he founded the Best Defense Foundation to help support two of his passions: youth outreach and military programs.

"I'm honored to be the recipient of the Salute of Service Award for my work with the military," Edwards said. "It means so much to me to continue the legacy of my grandfather, Maximino, by honoring the ones who defended – and continue to defend – freedom."

On the youth front, Edwards' foundation supported and funded numerous programs through organizations such as Boy Scouts of America, Boys & Girls Clubs of America and Read Across America that educated youth on nutrition and fitness. In addition, Best Defense Foundation also made a $40,000 donation to construct a new weight room at his alma mater, Chula Vista High School.

Edwards' commitment to providing a positive influence in a child's life is only matched by his admiration for, and advocacy on behalf of, active military members and veterans. Deeply personal, his passionate support for the military was born out of family ties – Edwards' grandfather served in World War II and survived the Japanese attack on Pearl Harbor.  Growing up being a part of a military family fueled his interest in military history, taught him first-hand what sacrifices veterans, servicemembers and their families endure, and motivated him to educate others on paying respect to servicemembers as well as how to honor those who gave up their lives to fight for our freedom.

"My grandfather was the inspiration to start the Best Defense Foundation," Edwards said. "His service and sacrifice to our country has always pushed me to pay tribute and give gratitude to those who protect our way of life. He always used to tell me that I have a tremendous amount of opportunity and freedom by being born in this great nation. I now want to use my platform to serve and give back to our active military personnel and veterans."

Edwards' gratitude for servicemen and women spurred him to participate in nine USO tours and one Armed Forces Entertainment Tour to help boost morale for troops overseas. He joined the 101st Airborne 506 E-Company Paratroopers – a group of military historians who participate in combat reenactments both in the United Stated and abroad – and has traveled extensively to Europe and Asia to tour numerous WWII sites. Ultimately, his experience in the reenactments and travel abroad pushed him to concentrate on the military component to his Foundation. Nearly 20 years later, the Best Defense Foundation now solely focuses on raising funds to take World War II and Vietnam Veterans back to their battlefields and memorials in an effort to help them make peace and pay respect to fallen soldiers who never received the opportunity to live a full life.

"It's been really rewarding for me. I've been taking back veterans for about 14 years and I've done over 33 programs around the world – from Berchtesgaden, Germany to the beaches of Iwo Jima, and everything in between," said Edwards.