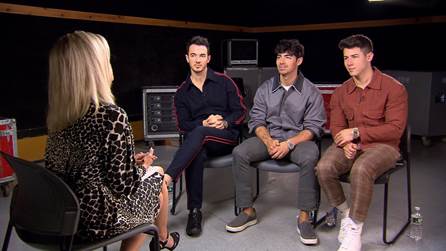 The Jonas Brothers, Kevin, Joe and Nick, were once among the hottest pop groups in America. But in 2013, faced with stagnating record and ticket sales – and a growing rift between the brothers – they split up. Now, in an interview with Tracy Smith for CBS SUNDAY MORNING, the brothers reveal they thought they would never perform together again.

"I checked out in my mind that – that was it. There's going to be no more brothers ever," Joe Jonas tells Smith in an interview to be broadcast Sunday, June 2 (9:00 AM, ET) on the CBS Television Network.

"And I feared that, you know, we – they would never speak to me again," younger brother Nick Jonas says.

The three Jonas brothers have since reunited, notched their first-ever #1 song on the Billboard charts and are lining up their first world tour since the breakup. Smith talked with them at their homes, in the studio and during rehearsals for their tour.

Nick Jonas admits that there were a lot of things going on at the time they split up.

"To call it creative differences is almost too simple," Nick says. "And I think a lot of people lost the appetite for what we were putting into the world. So, you know, we were putting up shows that weren't selling. We were making music that I don't think we were all super proud of, and it wasn't connected."

Their relationship was strained, he says.

"And so I had a very tough conversation with them where I laid it out for them," Nick says. "I said, 'You know, I feel like the Jonas Brothers should be no more, and we should go on individual journeys.' And it didn't go so well."

Separately, each of the brothers has had their own success. Nick Jonas launched a thriving solo career and has found his niche in both acting and fashion. Joe scored big on his own with the band DNCE, and oldest brother Kevin found success away from music, including a reality show with his wife, Danielle. The other two brothers have since married as well.

For the Jonas Brothers, the road back to the stage started with an idea to make a documentary about their story. That process got them talking and eventually playing together again.

"I think we – we definitely were supposed to go through all of what we went through to get to this point, definitely," Joe says. "I think it was, it was kind of, I guess you could say destiny, whatever it may be, but yeah, we got a do-over, and I think this time around we're going to do it right."

Lifestyle
Matt B. Davis Gives A Voice To The OCR World With Obstacle Racing Media