These 10 Cities & States Are Affected By Mosquitos & Ticks

Spring has finally arrived and with it, warmer temperatures and frequent rain showers. While many enjoy the sunshine, the rise in humidity and increase in standing water also welcome an influx of mosquitoes and ticks. To shed some light on areas with a higher concentration, national pest control leader Mosquito Squad has released a list of the top 10 mosquito cities and top 10 tick states. 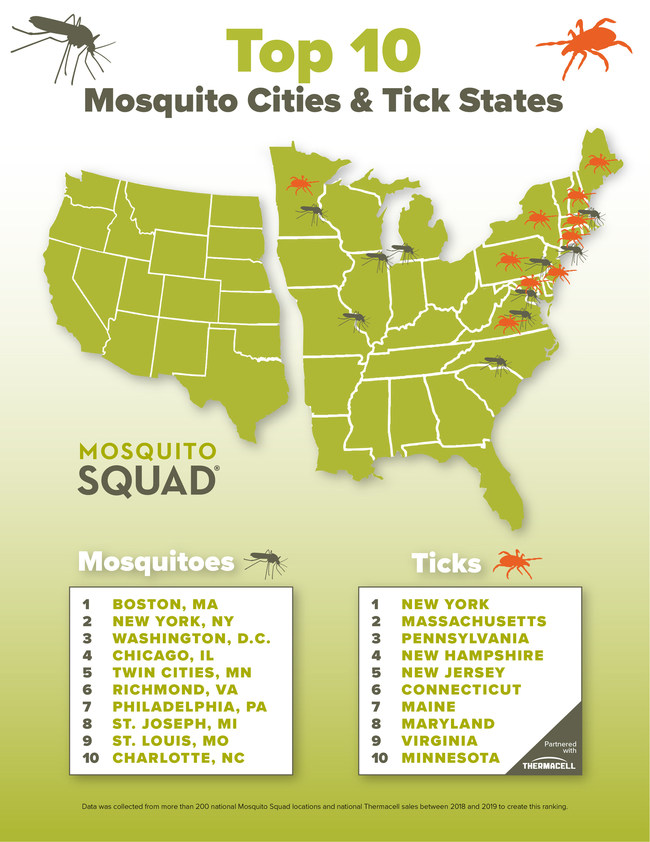 "Mosquitoes and ticks are more than an annoyance, as they can carry dangerous diseases that could affect the well-being of friends and family," said Amy Lawhorne, Chief Operating Officer of Mosquito Squad. "While the cities and states in this list represent the areas of highest concentration, mosquitoes and ticks seek refuge all over the country. Getting a mosquito or tick treatment is an effective way to rid your home of these dangers and is highly recommended as the season continues on."

Determined by the number of services provided in 2018, as well as sales from Mosquito Squad's tick control tube partner Thermacell, the lists show that New York, Massachusetts and Virginia were among the states that have a high concentration of both mosquitoes and ticks.

Each year, approximately 30,000 cases of Lyme disease are reported to the Center for Disease Control and Prevention, although other tracking methods suggest that approximately 300,000 people may get Lyme disease each year, with 96 percent of reported cases concentrated in 15 states including New York, Pennsylvania, Virginia and Connecticut. The possibility of contracting Lyme disease coupled with the continued threat of West Nile virus make mosquito and tick protection a priority for many homeowners. These insects breed in moist environments and with the Climate Prediction Center forecasting warmer-than-average temperatures and above-normal precipitation levels for parts of the country, the number of mosquitoes and ticks is likely to grow.

"It's important to remember that flooded areas create the ideal breeding ground for mosquitoes," said Lawhorne. "To keep them at bay, tip over anything that can hold water, toss lawn or tree debris and remove any tarps from the yard. Taking care of your yard and eliminating mosquito and tick habitats will allow you and your family to enjoy the spring and summer seasons without worry."

Founded in 2005 and proud sponsor of Malaria No More, Mosquito Squad specializes in eliminating mosquitoes and ticks from outdoor living spaces so that homeowners can enjoy their yards, and outdoor living and dining spaces. Since Mosquito Squad's partnership with Malaria No More, a nonprofit global health organization with the goal of ending malaria deaths in Africa, they have raised more than $400,000 to help fuel the fight against malaria.

FYI
What Are The Top 10 Cities For St. Patrick's Day Partying?

Sports
The Golden State Warriors Stars Open Up On "60 Minutes"