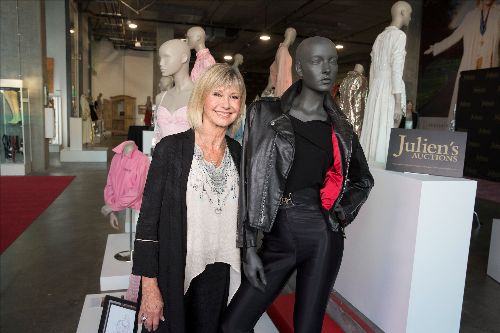 Julien's Auctions, the world-record breaking auction house, held its highly anticipated event PROPERTY FROM THE COLLECTION OF OLIVIA NEWTON-JOHN on Saturday, November 2 in Beverly Hills, CA in front of a packed audience of collectors, bidders and fans of the four-time Grammy award-winning singer and pop culture icon, live on the floor, online and on the phone.

The top moment of the event was the headline making sale of two of the most iconic items worn by one of the best-selling musical artists of all time and Hollywood film star, in her star making role as Sandy, in the blockbuster musical film–Grease (Paramount, 1978). In the film's finale number of "You're the One that I Want," Sandy (Newton-John) surprises Danny (John Travolta) with her transformation as a demure cheerleader to a sexy greaser girl wearing a black leather jacket and pair of figure hugging black shiny high waisted pants that were so tight that Newton-John had to be sewn into them. The ensemble struck "Greased Lightning" today on the auction stage with the jacket selling for an astounding $243,200 and the pants selling for $162,500 for a combined total of $405,700. 100% of the proceeds from the Grease jacket and pants will benefit the Olivia Newton-John Cancer Wellness & Research Centre with a portion of all of the items sold benefiting the Centre as well.

Grease was the word among other top auction highlights that included: a one-sheet advance Grease film poster signed by Newton-John, John Travolta as well as other cast members, the director Randal Kleiser and producer/ songwriter John Farrar that sold for a stunning $64,000, sixty four times its original estimate of $1,000; a custom "Pink Ladies" jacket presented to Newton-John by the cast and crew of Grease (estimate: $2,000-$4,000) that sold for $50,000, twenty-five times its original estimate of $2,000; a fourth-draft script for Grease, dated June 9, 1977 with handwritten notes and front cover signed by Newton-John and John Travolta that sold for $35,200; handwritten lyrics for the song "You're the One That I Want," written by John Farrar, signed by Newton-John, John Travolta and Farrar and Newton-John's personal Greasememorabilia collection  both sold for $12,500 each; her custom made 1950s inspired petal pink lace gown worn to the 1978 premiere of Grease at The Mann's Chinese Theatre in Los Angeles that sold for $18,750 (estimate: $3,000-$5,000); her tan leather dance shoes worn by the star while rehearsing the dance numbers for Grease that sold for $11,250 and more.