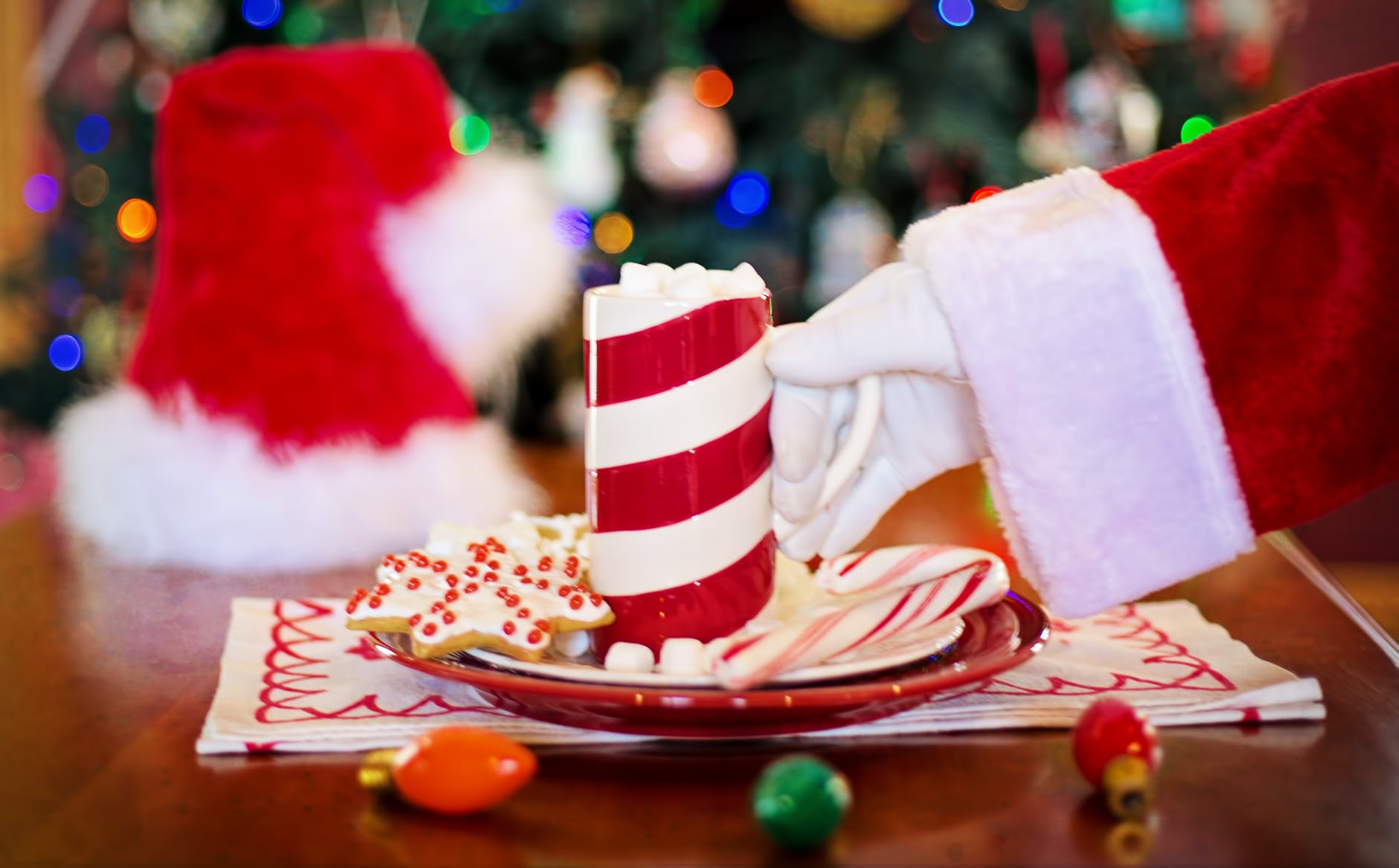 Food Network's seasonal lineup kicks off with the return of Holiday Baking Championship with host Jesse Palmer and tough love judges Nancy Fuller, Duff Goldman, and Lorraine Pascale premiering on Monday, November 4th at 9pm ET/PT, followed by a special episode of Holiday Baking Championship: Sweet Revenge at 10pm ET/PT where runners up from past seasons get a second chance to prove their holiday baking abilities. Then, at 11pm ET/PT it's the icing on top, with a new season of Christmas Cookie Challenge with host Eddie Jackson and lead judge Ree Drummond.
The holiday action continues on Wednesday, November 27th at 10pm ET/PT as Tyler Florence hosts The Great Food Truck Race: Holiday Hustle as food trucks hit the snowy roads of New England in the series' first-ever holiday-themed season. Next, Casey Webb heads to the North Pole on the new series Santa's Baking Blizzard, where ice sculptors and cake masters are challenged to defy the laws of ice and cake and bring the holidays alive, premiering on Thursday, November 28th at 9pm ET/PT. When the weather outside is frightful, the competition heats up on the return of Holiday Wars with host Jonathan Bennett on Sunday, December 1st at 9pm ET/PT as cake masters and sugar artists face-off to create mind-blowing holiday displays, followed by a new season of Holiday Gingerbread Showdown with host Paige Davis at 10pm ET/PT as gingerbread artists create edible gingerbread masterpieces. Kids Baking Championship: North Pole Edition premieres on Sunday, December 8th at 8pm ET/PT as Duff Goldman and Valerie Bertinelli challenge four beloved kid bakers from previous seasons to create the most spectacular treats for Santa. Alton Brown is having a "latke" fun on Good Eats with back-to-back episodes exploring latkes and libations on Sunday, December 15th at 8pm and 8:30pm ET/PT. Molly Yeh continues the Hanukkah celebration on Ultimate Hanukkah Challenge as four chefs are tested to put their creative spin on some of the holiday's classic dishes premiering Saturday, December 21st at 9pm ET/PT.Then, Duff Goldman rings in the New Year with the most spectacular cakes that transform from one decade to another new special Cake-Off: New Year's Eve, premiering Sunday, December 29th at 9pm.

Holiday Baking Championship returns on Monday, November 4th at 9pm ET/PT with a new batch of holiday bakers and even more decadent holiday desserts. Host Jesse Palmer,along with judges Nancy Fuller, Duff Goldman, and Lorraine Pascale, test the skills of ten talented bakers as they whisk, fold and frost their way through difficult challenges throughout the eight episodes. From yule log mashups to eggnog cakes, only one will 'sleigh' the competition for a chance to win the $25,000 grand prize and be featured on the new Food Network Kitchen app. For more baking fun, three previous runners up are back in the baking championship kitchen to prove their skills can rise to the top on the new one-hour special Holiday Baking Championship: Sweet Revenge at 10pm ET/PT. Jesse Palmer also offers up tips on how to survive the madness of the season while sharing highlights, amazing desserts and hilarious banter from past seasons on Holiday Baking Championship: Holiday Survival Guide on Monday November 11th at 11pm ET/PT.

Head online to meet the newest batch of contestants and find everything you need to bake all season long. On Food Network's Instagram and Facebook pages see our collection of decadent holiday creations and fun holiday competitions between the judges. Tell us your favorite holiday dessert using #HolidayBakingChampionship. Plus, don't miss Jason Smith in a weekly TVE series, Holiday Baking Championship: Extra Sweet, that gives a behind-the-scenes look at Holiday Baking Championship, beginning Monday, November 4th. Catch Jason as he takes fans backstage, giving a sneak peek at the camera feed from the live recording of Holiday Baking Championship, along with Jason chatting with the contestants, talking to the judges, and making recipes inspired by the challenges to show viewers how they too can join in on the holiday baking magic

Host Eddie Jackson returns with lead judge Ree Drummond this holiday season to challenge festive and talented cookie makers over a new eight-episode season of Christmas Cookie Challenge, premiering Monday, November 4th  at 11pm ET/PT, with subsequent episodes airing on Mondays at 10 pm ET/PT. Each episode features five daring cookie makers proving their holiday skills through two rounds, as Eddie and Ree are joined by a rotating panel of guest judges, including Matt Adlard, Vivian Chan, Dwayne Ingraham, Dan Langan, Brandi Milloy, Gesine Prado and Aarti Sequeira to help determine which bakers will have the best Christmas ever, walking away with a $10,000 prize. Head online to see the most creative holiday cookies ever, and on social go behind the scenes to watch Eddie, Ree and the other judges take on culinary challenges, and weigh in on your favorite cookies and moments using #ChristmasCookieChallenge.

The Great Food Truck Race: Holiday Hustle, hosted by Tyler Florence, premieres on Wednesday, November 27th at 10pm ET/PT. In the four-episode season, five aspiring food truck teams hit wintry New England locations in New Hampshire, Vermont and Rhode Island for high-stakes food challenges that test their cooking chops, business skills and selling strategies.  The last truck standing wins a holiday prize of $50,000, while the rest of the teams go home with coal in their stockings. Meet the teams and browse photo highlights of the competition, plus find out where Tyler eats when he's not on set as he explores the local food scenes on The Great Food Truck Race: The Extra Mile. Tell us who you think should take home the grand prize on social media using the hashtag #GreatFoodTruckRace.

On Thursday, November 28th at 9pm ET/PT it is an all-new competition series Santa's Baking Blizzard. On each episode of this four-part holiday tournament, Casey Webb challenges three teams of the country's most impressive ice sculptors and cake artists to create larger than life Christmas scenes for judges Jocelyn Delk Adams, Amanda Freitag and Zac Young. Teams must push their limit to bring festive holiday themes to life if they want to ice the competition and sleigh their way into the finale where they will compete for a stocking full of $25,000. Follow the competition using #SantasBakingBlizzard and relive the amazing cakes and gravity-defying ice sculptures from the show.

The competition continues on new series Holiday Wars as five teams of cake masters and sugar artists face-off to create mind-blowing holiday displays that are as festive as they are delicious, premiering Sunday, December 1st at 9pm ET/PT. Hosted by Jonathan Bennett, and featuring award-winning cake decorator Shinmin Li and Food Network's Jason Smith as judges, the teams must compete in two jolly rounds. First up is the Snowball Fight challenge, where the artists must use cake and sugar to create an edible holiday design in just 45 minutes. One winning team gets a vital advantage going into the second round. In the Winter Blizzard challenge, the teams are tasked with developing an eye-popping, masterful Christmas display made up entirely of cake and sugar. At the end of this battle, one team will jingle all the way home with a $25,000 grand prize! Join the conversation using #HolidayWars to share your favorite holiday creations and check out the competitors' amazing wintry confections.

The best gingerbread artists in the country must create the most incredible and edible gingerbread masterpieces on Holiday Gingerbread Showdown, premiering Sunday, December 1st at 10pm ET/PT. On this four-part stunt, host Paige Davis tests the skills of three gingerbread artists in each holiday-themed challenge. Judges Mary Berg, Maneet Chauhan and Adam Young determine the winner of each episode that advances to the grand finale where they will square off in the ultimate showdown. But it's not all gumdrops and candy canes as the clock is ticking on dreams of the $25,000 prize. Only one will be crowned Best Gingerbread Artistand will be featured in Food Network Magazine. Follow #GingerbreadShowdown for the latest baking hacks for a holiday spread that's both creative and classic. Plus, check out a complete guide on all things gingerbread, and fun competitions between the host and judges.

Four beloved kid bakers are back to compete on Kids Baking Championship: North Pole Edition on Sunday, December 8th at 8pm ET/PT. The bakers must think on their feet, as Valerie Bertinelli and Duff Goldman challenge them to fill a mini fireplace mantel with "Santastic Sweets." Special guest Casey Webb weighs in to help determine the winner of the baker's dream prize package of top-of-the-line baking equipment worth over $10,000.

Alton Brown celebrates the season with back-to-back holiday-themed episodes of Good Eats on Sunday, December 15th at 8pm and 8:30pm ET/PT. In an episode entitled "Whole Latke Love," Alton delves into the history and technique of the classic Hanukkah dish which, believe it or not, was originally made with a famous Italian cheese.  Alton then takes a deep dive into low-alcohol beverages with flavors that will knock you out, but the proof won't, in special episode "Holiday Spirit(s)". Check out Food Network's social pages to get holiday tips from Alton Brown. Plus, add your voice to the conversation with #GoodEatsTheReturn.

Molly Yeh hosts the first-ever special Hanukkah competition, Ultimate Hanukkah Challenge,on Saturday, December 21st at 9pm ET/PT. Inspired by the Festival of Lights, four seasoned chefs must pull out all the stops as they craft deliciously innovative dishes for judges Duff Goldman and Sharone Hakman. Over the course of three rounds, the chefs must put their spin on holiday classics like crispy potato pancakes, succulent brisket and fried jelly donuts. The last cook standing will win a vacation to the city of light, Paris, France, and the title of Ultimate Hanukkah Champion. Follow #UltimateHanukkahChallenge for a countdown with Molly Yeh leading into this special.

Duff Goldman is ringing in the New Year early on Sunday, December 29th at 9pm ET/PT with a special edition of Cake-Off: New Year's Eve as four professional bakers from around the country compete in unconventional baking and design challenges where flavor is only the tip of the icing. To find out who is the best, the bakers must capture change through the years in their innovative New Year's Eve cakes, but there's a catch - the cakes must also transform from old to new. The competitor who wows judges Duff Goldman, Dan Langan and Waylynn Lucas with the most over-the-top edible work of art will be crowned winner of Cake-Off: New Year's Eve and earn the $10,000 grand prize. Meet the hosts and judges and check out all the amazing creations by following #CakeOff.

For even more help with holiday meal preparation, fans will be able to use the Food Network Kitchen app to access 25 LIVE cooking classes each week, over 800 on-demand cooking classes, 3,000 instructional videos, 80,000 recipes, and more. Fans can also access step-by-step recipe instructions of fantastical creations straight from primetime seasonal series such as Christmas Cookie Challenge, Holiday Baking Championship, Holiday Gingerbread Showdown, Holiday Wars, Santa's Baking Blizzard, Ultimate Hanukkah Challenge to recreate holiday magic at home. Plus, following the finale of Holiday Baking Championship, fans can bake along with this year's winner on the Food Network Kitchen app as they give tips and tricks to help with all their baking needs year-round!

Lifestyle
Withings Is Just What You Need This Holiday Season