AARP's Words With Roseanne Barr & John Goodman: Still Funny After All These Years 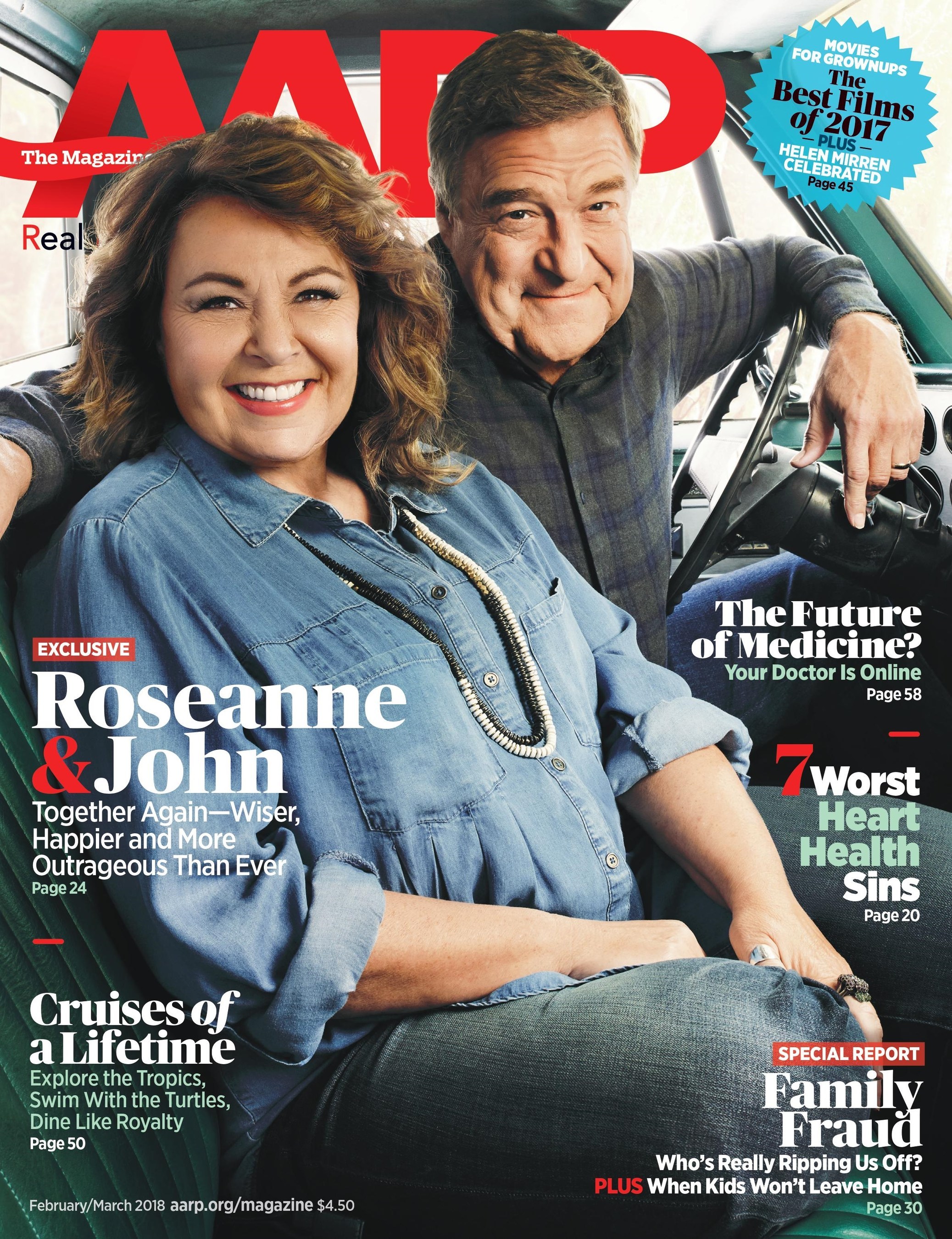 Good news: The trademark irreverent and straight-talking humor of Roseanne Barrremains in full throttle – perhaps more so, at the age of 65. And two decades of extraordinary movie success hasn't affected John Goodman's deep connection, both personally, and on screen, with Roseanne.

In the new issue of America's most-read magazine, one of the most beloved blue-collar TV couples offer perspective and sensibility on the present stage of their lives. "I really appreciate the fact that AARP didn't ask me to do their nude centerfold this issue," deadpans Barr.

Returning to their iconic starring roles – after two decades – heading the Conner clan in Roseanne, Barr and Goodman display a relaxed sense of themselves while bitingly funny in a circumspective interview with AARP The Magazine(ATM). In an age when sitcom "grownups" look more and more like college kids, the return of good ol' Roseanne and Dan is a reminder that the funny bone doesn't go numb at age 50. The Conners are now making sense of selfies, medical marijuana and rising health care costs and the growing divide between the superrich and the rest of us.

Following the run of the original Roseanne, Barr pursued whatever interested her, including a run for President, hosting a reality show and a stint as a Snickers pitchwoman, to name a few things. Barr now lives with her partner of 15 years on a 46-acre macadamia farm in Hawaii, near many of her children and grandkids. She says she and her boyfriend don't fight or argue much. "We learned that we need that energy for things like climbing stairs, chewing and getting off the toilet." Goodman has appeared and received critical acclaim for a number of roles in TV and film, including The West Wing, The Artist and a frequent host of Saturday Night Live. He's also given up alcohol and lost 100 pounds. Says Goodman, "I used to play harmonica and sing a little bit. But after I got sober, I realized that I actually have no talent."

On tackling tough issues on Roseanne:

RB: "…hate-triotism. We need to stop letting ourselves be herded into these two hostile camps. We have to come together and place the blame where it really belongs—on people who exercise." "…Hey, man, at this age, I try to focus on the things I love, like humor, naps—and not dying."

On being a grandma:

RB: "I swear and stuff—everything their parents don't want me to do, I like to do. We get in the pool and have squirt gun fights… My grandkids know how to grow their own food, too, and that's what I wanted them to know more than anything—how not to be dependent…I thought I made all the statements I wanted to make as a comic… as a grandparent, I realize there's way more to say, like watching how your kids raise their kids. That's a big part of the reboot, and it's a big part of my life, too. They're just so dependent on technology, and it's all different. They talk a whole different language, y'know?"

On being a father:

JG: "I have a daughter that I worried about for a while. She grew up with an alcoholic father until she was in high school. But things are great now. They're probably a lot better than I thought they would turn out. When you're younger, you don't know yourself that well. I've maybe not learned a lot, but I've learned to appreciate things that I should have before."

On their advancing years:

RB: "There's an upside to the creaks and pains of age… It forced me to slow down, which is good. If you fight your body as it ages, you're not gonna win." "…You can still be kinda hot at 65, in your own mind."

JG: "I've got bionic parts now (in reference to his set of titanium knees). You live through enough and survive, you have to make peace with your flaws and your broken pieces."

On taking stock of life:

JG: "I started looking back fondly and realized how lucky I had been—and I really feel that now."

On his dramatic weight loss:

JG: "It was basically just portion control…I was just shoving everything into my mouth. But I don't want to be an example to anybody when the weight comes thundering back on—when I start eating Crisco out of the can with a spoon and a side of confectioners' sugar."

On working on the Roseanne reboot:

RB: "Every day, I pinch myself and wonder, Is this the most fun in the world or the onset of dementia?"

JG: "Although it's harder because I'm older. Daddy gets tired; Daddy gets a headache and can't remember his lines sometimes…I thought for some reason I was expert on humor when I was younger. I don't have to work so hard to be funny now."

Television
Joel McHale Is Back... This Time On Netflix