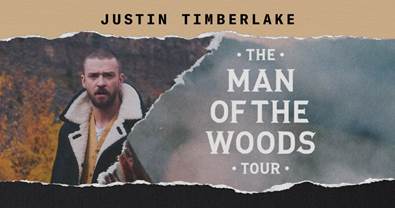 Live Nation has confirmed that the Justin Timberlake Man Of The Woods concerts previously postponed in Los Angeles, Phoenix, Las Vegas, Fresno and Oakland have been rescheduled with confirmed shows in March 2019 (see listing below).  Tickets for the previously scheduled concerts are valid at the respective new dates in each city.

Justin Timberlake is sorry for the inconvenience to his fans and looks forward to seeing everyone at the rescheduled events.

Tickets for the previously scheduled performances honored at the applicable rescheduled date.

Refunds if needed are available at point of purchase.