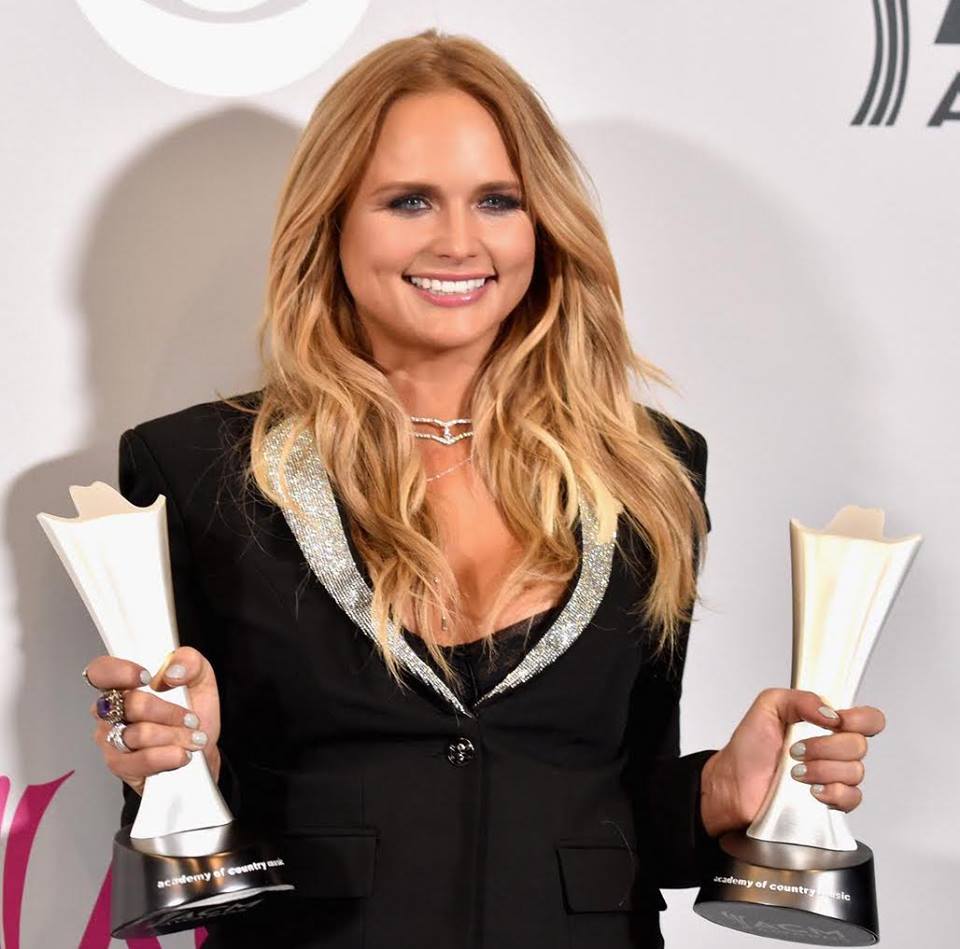 Miranda Lambert tops the list of nominees for "The 51st Annual CMA Awards" with five nominations. Little Big Town and Keith Urban each garner four nominations, tying for the second most nominations this year.

"The talent of the past year for Country has been exceptional," said Sarah Trahern, CMA Chief Executive Officer. "It's great to see nominee names that have graced the list before, and continue to deliver quality artistry. It's equally thrilling to see six new names – ushering in a new generation earning their first CMA Awards nods."

"The 51st Annual CMA Awards" will be hosted by Brad Paisley and Carrie Underwoodand broadcast live from Bridgestone Arena in Nashville, Wednesday, Nov. 8 (8:00-11:00 PM/ET) on the ABC Television Network.

Lambert's name appeared more than any others this year with nominations in the Single and Song of the Year categories for "Tin Man," produced by Frank Liddell, Eric Masse, Glenn Worf, and written by Jack Ingram, Lambert, and Jon Randall. Masse also mix engineered the song. Lambert secured her fourth nod for Album of the Year with The Weight of These Wings, produced by Liddell, Worf, and Masse; Music Video of the Year for "Vice," directed by Trey Fanjoy; and Female Vocalist. This is Lambert's eleventh nomination for Female Vocalist, a category she's won a record-setting six consecutive times (2010-2015). Lambert is the most awarded female in CMA Awards history with 12 trophies. This year's nods bring her to a career total of 44 CMA Awards nominations.

Little Big Town's nominations include Single, produced by Jay Joyce and mix engineered by Jason Hall and Joyce; Music Video of the Year directed by Becky Fluke and Reid Long for "Better Man"; Album of the Year for The Breaker, also produced by Joyce; and Vocal Group of the Year. This is Little Big Town's fourth nomination for Music Video. They have been nominated in past years for "Pontoon" (2012), "Tornado" (2013), and "Girl Crush" (2015). They are seven-time CMA Awards winners and this year's nods bring their career total to 26 nominations. Taylor Swift received her 23rd nomination for writing "Better Man," marking her second nomination for Song of the Year and first CMA Awards nod since 2014.

Church scored recognition in the Entertainer of the Year category, as well as Male Vocalist, his sixth consecutive nomination, and Musical Event of the Year for "Kill A Word" featuring first-time nominee Rhiannon Giddens. He is a three-time CMA Award winner with 25 total career nominations.

Reigning CMA New Artist of the Year Morris is nominated for Female Vocalist and as a featured artist with Thomas Rhett for Musical Event and Music Video for "Craving You," which was directed by TK McKamy. This is Morris' second nomination for Female Vocalist and first for Music Video and Musical Event. This year's nominations bring her total CMA Awards nods to eight.

Thomas Rhett received nominations for Male Vocalist and Musical Event and Music Video for "Craving You" with Morris, marking his first-time noms in all three categories. He is the reigning CMA Single of the Year winner for "Die A Happy Man."

Five-time CMA Awards winner Stapleton is nominated for Entertainer of the Year, Male Vocalist and Album for From A Room: Volume 1, which was produced by Dave Cobb and Stapleton. He receives one nomination for album, but can receive an additional trophy as producer. This is Stapleton's third consecutive nomination for Male, which he's won the past two years. He was also nominated for Entertainer last year and won Album for Traveller in 2015. He is an 11-time CMA Awards nominee.

Hunt was recognized in the Single and Song categories for the record-setting "Body Like A Back Road," produced and mix engineered by Zach Crowell, and written by Crowell, Hunt, Shane McAnally, and Josh Osborne. In 2015, Hunt received the same nods for "Take Your Time." He is a five-time CMA Awards nominee.

Lady Antebellum is nominated for Vocal Group of the Year and Album for their latest effort Heart Break, produced by busbee. Their previous records Need You Now (2010) and Own The Night (2012) both received Album nods. They are a 10-time consecutive (2008-2017) Vocal Group nominee and have won the category three years back to back (2009-2011).

For the second year in a row, Old Dominion received nods for Vocal Group of the Year and New Artist of the Year. They have four career CMA nominations.

Reigning CMA Entertainer of the Year Brooks returns with his 12th nomination in the category, a title he has won five times (1991, 1992, 1997, 1998, 2016), making him the most awarded artist in this category. Two-time former Entertainer Bryan rounds out the nominees for this category.

McEntire nabbed her eighteenth nomination for Female Vocalist, a category she's won four years consecutively (1984-1987). She is a six-time CMA Awards winner and now ties Brooks & Dunn with 50 career CMA Awards nominations. She is the most nominated female in CMA Awards history.