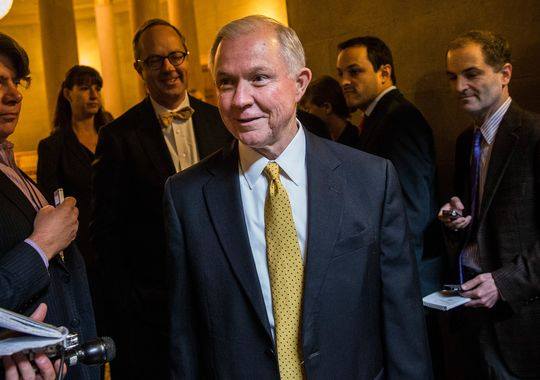 President-elect Donald J. Trump announced that he intends to nominate U.S. Senator Jeff Sessions to serve as Attorney General and U.S. Rep. Mike Pompeo as Director of the Central Intelligence Agency.  Lt. Gen. Michael Flynn has been selected to be the Assistant to the President for National Security Affairs.

U.S. Senator Jeff Sessions has dedicated his life to public service. He has served as both the U.S. Attorney for the Southern District of Alabama and Alabama Attorney General prior to his service in the U.S. Senate. He has been one of President-elect Trump’s trusted advisors on the campaign and will now continue his service as our nation’s chief law enforcement officer.

“It is an honor to nominate U.S. Senator Jeff Sessions to serve as Attorney General of the United States,” said President-elect Trump. “Jeff has been a highly respected member of the U.S. Senate for 20 years. He is a world-class legal mind and considered a truly great Attorney General and U.S. Attorney in the state of Alabama. Jeff is greatly admired by legal scholars and virtually everyone who knows him.”

"I am humbled to have been asked by President-elect Trump to serve as Attorney General of the United States,” said U.S. Senator Sessions. “My previous 15 years working in the Department of Justice were extraordinarily fulfilling. I love the Department, its people and its mission. I can think of no greater honor than to lead them. With the support of my Senate colleagues, I will give all my strength to advance the Department's highest ideals. I enthusiastically embrace President-elect Trump's vision for ‘one America,’ and his commitment to equal justice under law. I look forward to fulfilling my duties with an unwavering dedication to fairness and impartiality."

Lt. Gen. Michael Flynn, a retired United States Army Lieutenant General and former director of the Defense Intelligence Agency, assumes the position of National Security Advisor with a decorated career of more than 35 years in service to our nation. He served as President-elect Trump’s top military advisor during the campaign and will now continue providing expert advice and support to the President-elect as his National Security Advisor.

“I am pleased that Lieutenant General Michael Flynn will be by my side as we work to defeat radical Islamic terrorism, navigate geopolitical challenges and keep Americans safe at home and abroad,” said President-elect Trump. “General Flynn is one of the country’s foremost experts on military and intelligence matters and he will be an invaluable asset to me and my administration.”

"I am deeply humbled and honored to accept the position as National Security Advisor to serve both our country and our nation's next President, Donald J. Trump,” said Lieutenant General Flynn.