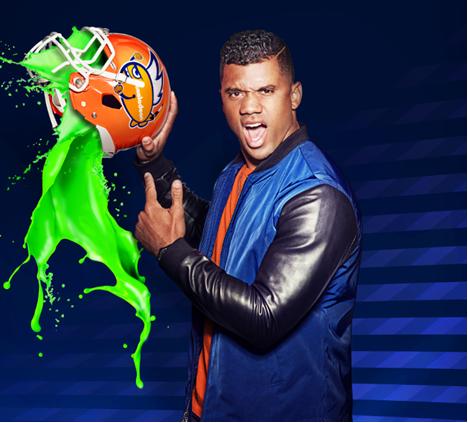 Nickelodeon announced the nominations for the second annual Kids’ Choice Sports 2015, the only awards show for kids where NFL champions go head-to-head with tennis legends, and NBA record holders compete with NASCAR racers celebrating kids’ favorite athletes and sports moments of the year.

Additionally, leading up to the highly anticipated telecast, Nickelodeon is kicking off tryouts for the Kids’ Choice Sports 2015 “Triple Shot Challenge,” which will give three kids ages 9-14 an opportunity to score $50,000 each during the live broadcast. Beginning June 8, fans can cast their votes in 12 total categories on Nick.com/sports. Hosted by Seattle Seahawks Super Bowl Quarterback, Russell Wilson, trophies will be handed out LIVE on Thursday, July 16 at 8 p.m. (ET/PT) from Pauley Pavilion in Los Angeles.

Beginning this month, Nickelodeon will kick off tryouts for the Kids’ Choice Sports 2015 “Triple Shot Challenge,” which will give three kids ages 9-14 an opportunity to score $50,000 each during the live broadcast. The three finalists chosen will each be tasked with completing one athletic feat across either soccer (hit the crossbar of a soccer goal from up to 22-yards away), football (throw a football to hit a target from up to 30-yards) or basketball (sink a half-court shot). Auditions will be held in three locations, kicking off with the soccer tryouts on June 13 in the Bronx, NY at the New York City FC vs. Montreal Impact match. On June 20, Nickelodeon will partner with the New York Giants to host the football tryouts at Quest Diagnostics Training Center in East Rutherford, NJ. Auditions for the “Triple Shot Challenge” will come to a close on June 27 in Los Angeles, CA at the LA Convention Center hosted by the BET Experience at L.A. Live, where Nickelodeon will hold tryouts for the basketball challenge. The “Triple Shot Challenge” builds upon the excitement of last year’s half-court contest which saw Ricardo Jacobo Jr. of Los Angeles, CA win $50K for sinking a half-court shot during the live show. For more information about “Triple Shot Challenge” tryouts please visit http://at.nick.com/crossbarchallenge (soccer), http://at.nick.com/perfectpass (football) or  http://at.nick.com/halfcourtshot (basketball).