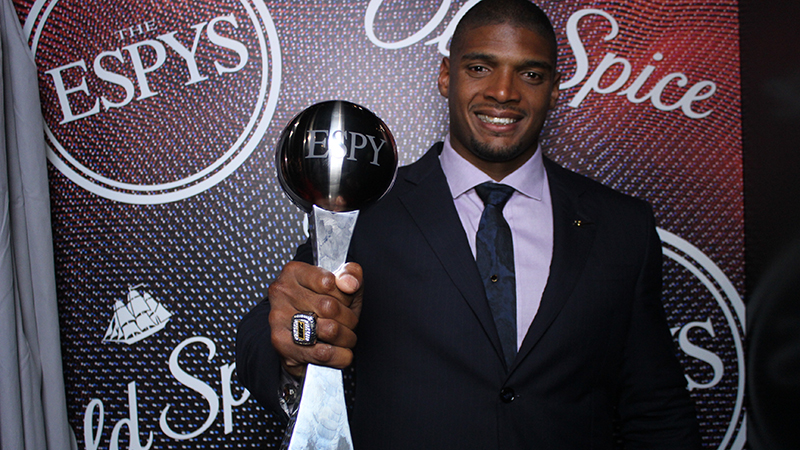 The ABC Television Network and ESPN announced “The 2015 ESPYS” Presented by Capital One will move to ABC and broadcast live on WEDNESDAY, JULY 15 from Nokia Theatre L.A. LIVE in Los Angeles. The celebration of the best moments from the year in sports kicks off with “SportsCenter at The ESPYS” and “The ESPYS Countdown Show Presented by Capital One” airing from 6:00-7:00 p.m., ET and 7:00-8:00 p.m., ET, respectively, on ESPN prior to the start of the awards.

The award show gathers top celebrities from sports and entertainment to commemorate the past year in sports by recognizing major sports achievements, reliving unforgettable moments and saluting the leading performers and performances. “The ESPYS”raise more than $1 million annually for The V Foundation, the charity founded by ESPN and the late basketball coach Jim Valvano to promote cancer research.

“Our goal with “The ESPYS”each year is to celebrate the year in sports while showcasing inspiring human stories through our three pillar awards -- the Jimmy V Perseverance Award, the Arthur Ashe Courage Award and the Pat Tillman Award for Service,” said Connor Schell, vice president, ESPN Films and Original Entertainment, who oversees “The ESPYS.” “We are thrilled to broadcast this year’s ESPYS on ABC.”

“The ESPYS attracts celebrities from the movie, television, sport and music industries. This is an opportunity to celebrate the playmakers and share in the emotional connection they have with their favorite sports on the network that is their home away from home,” said Robert Mills, Senior Vice President, Alternative Series, Specials & Late Night Programming, ABC Entertainment. “We can’t think of a better way to celebrate the show than to offer it a larger landscape for more people to participate in the celebration.”

FYI
Joel McHale To Host The 2015 ESPYS This July