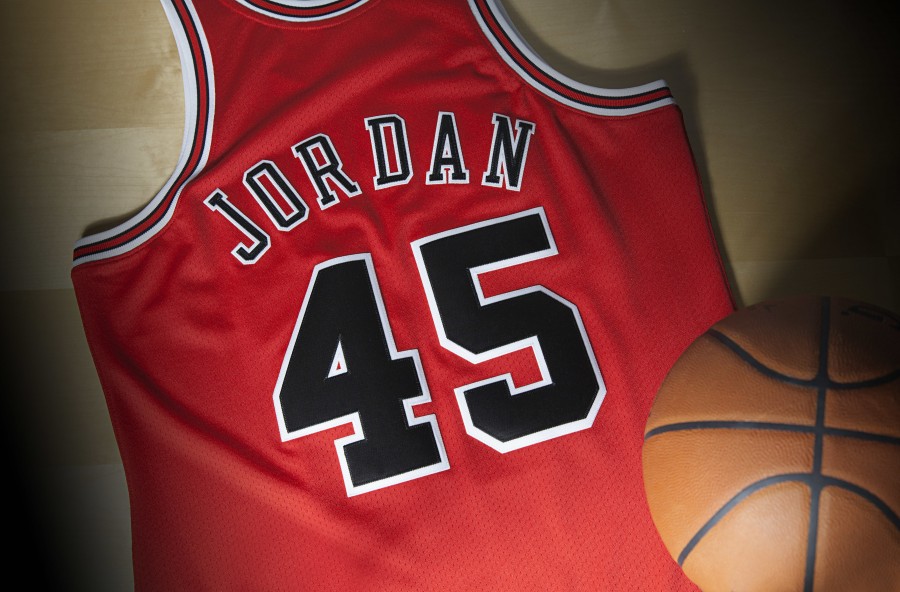 This March, Mitchell & Ness as part of their ongoing partnership with Michael Jordan and the Jordan brand, will release Michael Jordan's Chicago Bulls jersey number 45. Retailing at $300, the March 19, 2015 product release marks the 20th anniversary of Jordan's return to the NBA and the court, wearing the number he also wore while playing for minor league baseball team the Birmingham Barons. Michael Jordan's legendary number 23 with the Chicago Bulls was retired by the Bulls on November 1, 1994.

On March 18, 1995, Jordan announced his return to the game with a two-word press release simply stating "I'm back". This announcement came one and a half years following his retirement from the game of basketball on October 6, 1993. Jordan's return debut was against the Pacers in Indiana with Jordan finishing the game with 19 points, 6 rebounds and 6 assists.

Jonathan Yuska, Head of Mitchell & Ness, comments, "Michael Jordan's return to the NBA on March 19, 1995 is a memorable and iconic moment in the history of the NBA. We are proud and honored to be able to commemorate this moment by recreating Jordan's number 45 jersey. We hope fans of MJ and the NBA enjoy wearing it as much as we enjoyed bringing it back."

Mitchell & Ness is the exclusive maker of NBA Michael Jordan jerseys from the Spring 2014 through the Fall | Holiday 2016 seasons. Mitchell & Ness has chosen a select series to celebrate key anniversaries of signature, career-defining MJ moments, and the historic moment of MJ's return to the game as number 45 on the Bulls, a highlighted moment in MJ's career.

L. A. Glam
DSW Expands Their Shoe Empire With New Stores This Spring

Electronics
Let The Apple Watch Craze Begin, Or Not?