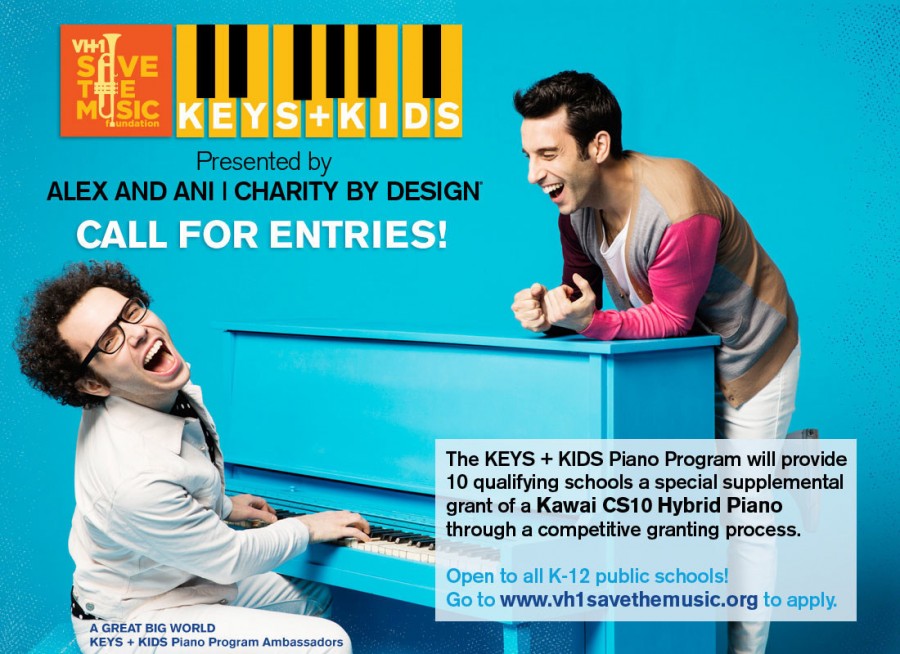 Ian Axeland Chad Vaccarino, members of the songwriting duo A Great Big World, joined forces with the VH1 Save The Music Foundation to announce their participation in the second annual Keys + Kids initiative open to K-12 public schools. The program was created in response to the growing need for high-quality, functional pianos in schools, and to provide students with an opportunity to have their school be an environment where their talent can shine.

Beginning March 16th and through April 17th, interested K – 12 public schools can submit their application at www.vh1savethemusic.org/keyskids to receive one of ten packages valued at $10,000. Each grant includes a Kawai piano to support their music and arts program.

A Committee made up of members of the Foundation's Board of Directors, VH1 Senior Staff and patrons of the Keys + Kids Leadership Circle will judge applications. Grant winners will be announced on the Foundation's website on May 20, 2015.

Since meeting at The Steinhardt Music Program at New York University, Ian and Chad have used their instrumental and songwriting talents to create memorable melodies that have reached millions. Their song "This is the New Year" was featured on the hit show Glee in 2013 and, more recently a version of their song "Say Something" featuring Christina Aguilera won the Grammy for best pop duo/group performance. Much of their success is owed to their formal music training, which included vocal training as well as piano lessons that helped shape their signature sound. This knowledge of the importance of formal music education from an early age and their impeccable talent make A Great Big World wonderful ambassadors for this program. Axel and Vaccarino say "It is critical that kids have the tools they need to learn and excel at music. We can't imagine where we would be right now if we didn't have access to great teachers and music programs. We are thrilled to join VH1's Save The Music and help put more pianos in schools."

The VH1 Save The Music Foundation is a non-profit organization that restores instrumental music education programs in public elementary and middle schools across the country. Music and art are integral parts of a child's development and key components of each student's complete education. Music education helps improve performance in all core subjects, while encouraging collaboration and creative thinking. Now in its sixteenth year, the Emmy and Peabody Award-winning Foundation, has provided more than $51 Million in new musical instruments to 1,900 public schools in 231 districts around the country, impacting the lives of over 2.3 million children.

"We are incredibly excited to have talented musicians like A Great Big World to help us promote the Keys + Kids Piano Program for its second year," said Paul Cothran, Executive Director, VH1 Save The Music Foundation. "There is a bounce in pride and morale when a school has a robust music program and the feeling of community extends beyond the school doors. This initiative would not have been possible without our Keys + Kids Leadership Circle that includes: Avnet Inc., Alex and Ani : Charity By Design, JetBlue, Nat King Cole Generation Hope, Inc., Music Drives Us, Mullen, NAMM, Bloomingdale's and individuals nationwide. Their continued support of this program has been integral to our mission of continuing to provide students the maximum benefits of music education."