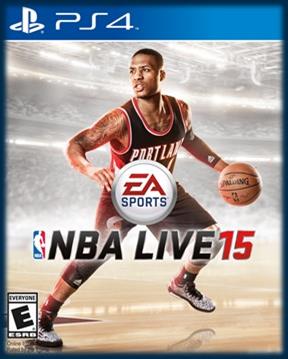 EA SPORTS announced that Damian Lillard will be featured as the cover athlete for NBA LIVE 15. Lillard shared the news with his fans via social media, and EA also released a special video celebrating Lillard’s appearance on the cover.

Lillard’s involvement in the franchise goes beyond a simple cover appearance, as he has been working with the NBA LIVE team for the past two years. Lillard participated in motion capture and voice over sessions in both Orlando and Vancouver, Canada where the team was able to capture his signature movement including dribbling and shooting.  The team also scanned his head for likeness and recorded facial performance as well as had design sessions about the creative direction of the game. Damian is also the star and storyteller of the new Learn LIVE onboarding mode, where he teaches players the basics of NBA LIVE 15 and recounts his own life journey in basketball.  Lillard is already making his presence known in the EA SPORTS family, appearing alongside Kevin Hart and Dave Franco in the recent Madden Season video.

Damian Lillard was selected in the first round of the 2012 NBA Draft by the Portland Trail Blazers, and went on to earn Rookie of the Year honors in 2013. Lillard’s impressive young career has continued to flourish, as he was named to the NBA West All-Star Team in 2014. He is also a two-time NBA Skills Challenge champion.

NBA LIVE 15 arrives with the most photo-realistic visuals in franchise history and 500+ core gameplay improvements delivering a truly fluid, fun and authentic basketball gaming experience. Reimagined visuals drop you courtside alongside the game’s biggest stars. See the intensity on a player’s face as he nails a game-winner, or the frustration of a heart-wrenching loss. All-new real-time physics on dunks and layups replicate some of the NBA’s most amazing physical plays, letting you posterize your opponent or deny his attempt at the rim. Add into the mix always-connected online game modes and LIVE’s Synergy Sports partnership and you’ll never miss a beat during the NBA season with new content updated daily, all season long.