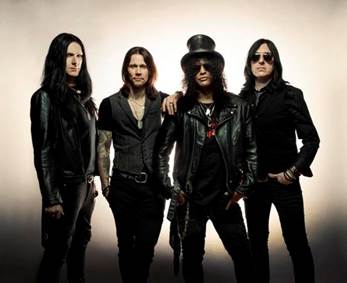 The Gibson Brands AP Music Awards, fueled by Monster Energy Drink, is pleased to announce a renowned addition to this year’s list of stellar award recipients. Iconic, Grammy-winning, Rock and Roll Hall of Fame guitarist Slash will be honored as the first recipient of the Guitar Legend Award presented by the Rock And Roll Hall of Fame. As one of the first covers for Alternative Press magazine, Slash continues to create and innovate as well as influence multiple generations of musicians on the guitar.

Slash Featuring Myles Kennedy and The Conspirators will release their new album World On Fire September 16 via Slash’s own label Dik Hayd International distributed through Caroline. Featuring the blazing title track as the newly released first single, the song has gone Top 15 at Active Rock in just 3 weeks, making it the fastest ascent into the Top 15 for Slash as a solo act. World On Fire marks Slash’s third solo album and second one with his band: Myles Kennedy (vocals), Brent Fitz (drums) and Todd Kerns (bass). Slash Featuring Myles Kennedy and The Conspirators will preview new songs for fans their nationwide summer tour with Aerosmith (with select solo dates) launching Thursday, July 10 at Nikon at Jones Beach Theatre in Wantagh, NY. For all dates and tour ticket packages, visit: http://slashonline.com/tour.

The Gibson Brands AP Music Awards, fueled by Monster Energy Drink, will take place on July 21, 2014, held at the Rock And Roll Hall Of Fame And Museum at North Coast Harbor in AP’s hometown of Cleveland. In its inaugural year, the APMAs will be hosted by six-time AP cover star Mark Hoppus (Blink-182) and will feature performances from A Day To Remember, All Time Low, Asking Alexandria, Fall Out Boy, Falling In Reverse, Joan Jett & The Blackhearts, Machine Gun Kelly, the Misfits, Sleeping With Sirens, twenty one pilots and Brendon Urie of Panic! At The Disco, with more to be announced.

To vote for the show, visit www.altpress.com/apmas

FYI
Women of Rock Set Out To Sea