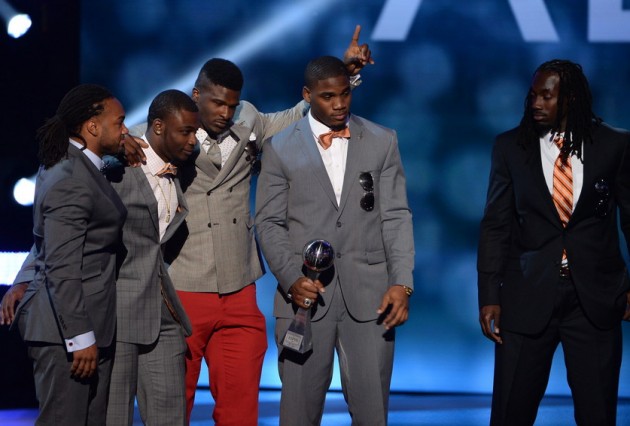 The biggest stars from the worlds of sports and entertainment gathered in downtown Los Angeles at the Nokia Theatre on Wednesday night to celebrate the best sports stories of the year at The 2014 ESPYS Presented by Capital One, hosted by Drake, which aired live on ESPN.

Peyton Manning, who won his third ESPY for Best NFL Player, also accepted the award for Best Record-Breaking Performance. He became the first athlete to be honored twice for breaking the same record.

The U.S. Men’s National Soccer Team was on hand to accept its Best Moment award for the win over Ghana in the 2014 FIFA World Cup, where Clint Dempsey and John Brooks scored goals that captured the world’s attention.

Three awards served as the emotional pinnacle of the industry-wide sports celebration. Stuart Scott was presented the Jimmy V Perseverance Award, given each year in honor of the late Jim Valvano and The V Foundation for Cancer Research, for the passion and determination he has displayed in the face of cancer. The Arthur Ashe Courage Award was presented to Michael Sam for breaking stereotypes, paving the way for others following him and displaying courage that resonates beyond sports. And a new annual award added this year, The Pat Tillman Award for Service, was given to Josh Sweeney, a Purple Heart recipient and a member of the U.S. Paralympic Sled Hockey Team that won the gold medal at the 2014 Paralympic Winter Games in Sochi, Russia.