Movie Review: "The Purge: Anarchy" Takes You On The Street For America's Bloodiest Holiday

America loves freedom. Freedom of speech. Freedom to make as much money as you can fit in the bank. Freedom of press. Last summer, writer/director James DeMonaco ("The Negotiator") introduced theater goers to an alternate near-future where American citizens are granted an additional freedom… the freedom to kill. 2013’s “The Purge” explored the possibility of a United States where poverty, crime, and over population are virtually nonexistent because once a year, every year, the entire country is allowed to hunt down and murder whomever and whatever they want. Fast forwarding a year, this week’s “The Purge: Anarchy” expands on this grisly form of institutionalized survival of the fittest by taking audience members on a thrilling adventure through the blood soaked streets of purge night. Doing what sequels do best, the action, the gore, and the thrills are all ratcheted up for this second wild ride from the same filmmakers as the original.

For the millions out there that have always wished to exact brutal revenge on a prickly boss or cheating significant other, purge night is the best time to do so without fear of retribution. For everyone else, this is the most terrifying 12-hours of the year for the exact same reasons. This is where “Anarchy’s” story picks up. Stepping out of the suburban house where Ethan Hawke and Laura Headey were terrorized in the original film, DeManaco 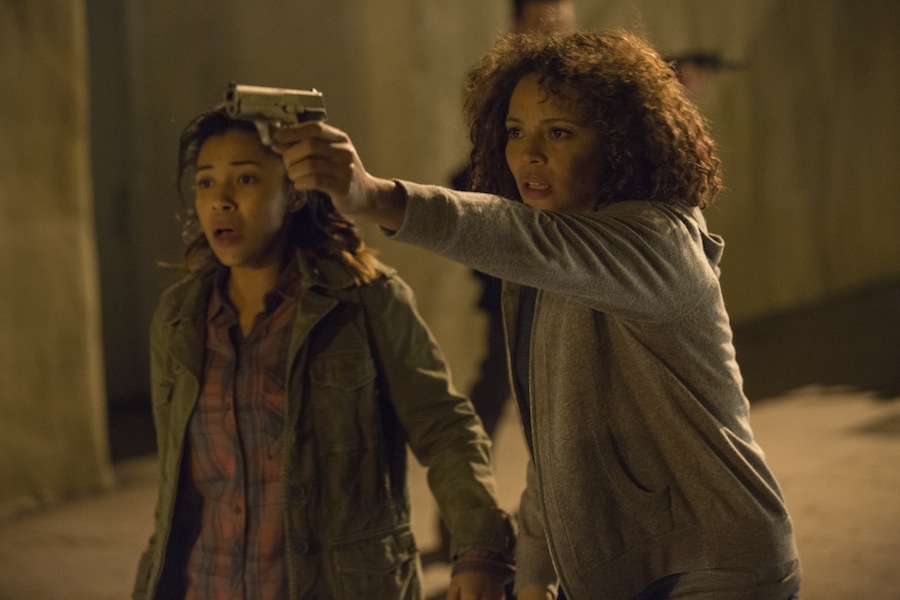 reintroduces us to the world of the Purge as we follow five new characters. There’s Sergeant (Frank Grillo), a mysterious lone wolf hell-bent on retribution for some unknown reason; a bickering couple, Shane (Zach Gilford) and Liz (Kiele Sanchez), who are left stranded after their car craps out on them; and Eva (Carmen Ejogo) and Cali (Zoë Soul), a single mother and daughter. All three groups are conveniently thrust together after Shane rescues Eva and Cali as they’re being pulled from their apartment building by a group of secret government mercenaries.

What follows is an hour and forty-minute survival story where our five bedraggled heroes are faced with increasingly more difficult and bloody scenarios as they try to live to see the end of the purge. Shane and Liz — the yappy white suburbanites — come to represent nothing more than stock characters, and Eva and Cali aren’t very compelling either, but DeMonaco expertly crafts a murky grey area protagonist in Sergeant.

Best known for small roles in such action flicks as “Captain America: The Winter Soldier” and “Warrior,” Frank Grillo shows that he definitely has the acting chops to hold his own when given a meatier part. While the storyline and the majority of his 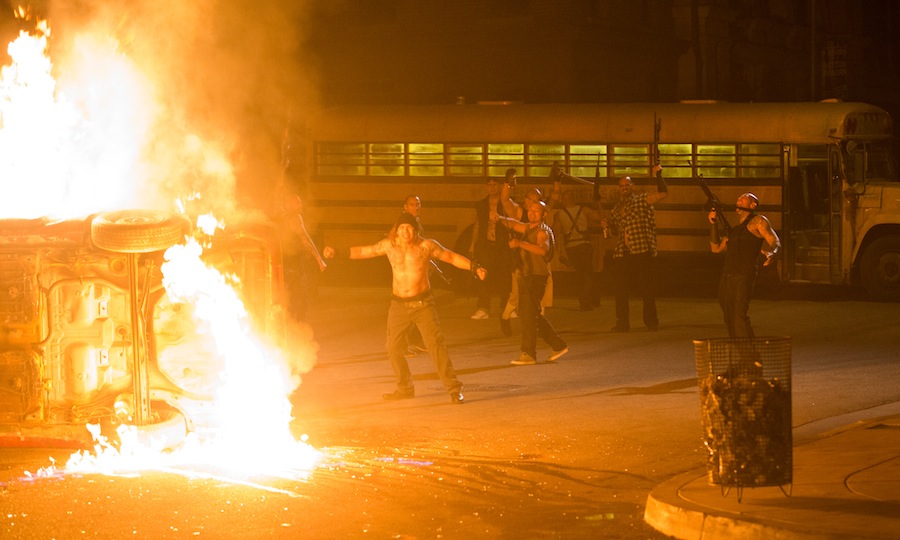 supporting cast members don’t rise above B-movie quality, Grillo’s brooding demeanor and badass fighting skills help elevate the film with every twist and turn. It takes almost the entire movie to figure out whether or not to trust Sergeant, and Grillo plays with the audience’s emotions with ease.

As the group makes their way through the even more dangerous than usual streets of downtown Los Angeles, DeMonaco seizes every opportunity to create jump-in-your-seat spooky moments. By using  handheld camera angles, saturating the screen with as much dark colors as possible, and constantly keeping the viewer at ground level right alongside the film’s heroes, DeManaco successfully ramps up the creepiness from his first film.

While our heroes try their best to avoid the gangs of bloodthirsty hooligans, their encounters also give DeMonaco the opportunity to explore a national nightmare that is very much present in our modern society. There is really no better political talking point than America's unevenly distributed wealth gap. In DeMonaco’s world, at least the less fortunate members of the population have the chance to fight back against the upper class. 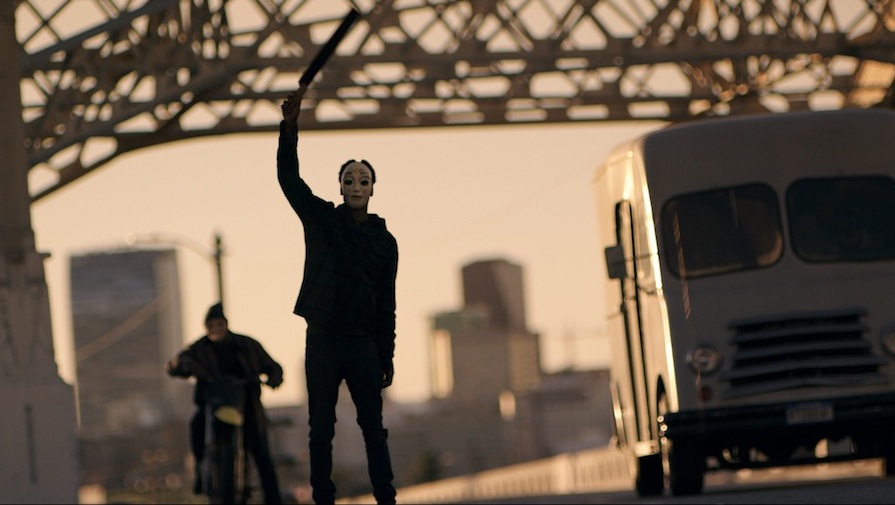 Yet with so much going on, the overall tone of the film shifts constantly. Part social satire, part Blumhouse horror film, and even possessing elements of dark comedy and thriller, “The Purge: Anarchy” is all over the place when it comes to what genre it should be classified as.  But in the end, because there is literally non-stop action from start to finish, the best way to describe the picture is by calling it a thrill ride. And when it comes to raising the bar in that category, no other film this summer comes close to competing.

This excessive amount of “The Warriors” style street violence can come back to haunt the progression of “The Purge” franchise, however. With “The Purge,” DeManaco focused on how one family coped with the new national holiday. With his latest, he successfully took the audience on the street to see the event on a grander scale. But where does the series go from here? We’ve seen it all. The bullets, the murders, the machete-wielding madmen. “The Purge: Anarchy” will certainly cash in on the success of last year’s unexpected hit, but it might also be the sign of the beginning of the end of this fledgling franchise.