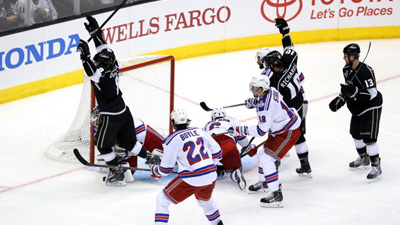 Just over 15 minutes into the Stanley Cup finals, the Los Angeles Kings had fallen into yet another two-goal hole against the speedy New York Rangers. Justin Williams knows Los Angeles should stay out of these jams. After Williams scored his latest winning goal, he also had to acknowledge the comeback Kings can handle just about any perilous situation. Williams scored 4:36 into overtime after a turnover by Dan Girardi, and Los Angeles beat New York 3-2 on Wednesday night in the Stanley Cup finals opener. Kyle Clifford had a goal and an assist for Los Angeles, and Drew Doughty made up for an early mistake by scoring the tying goal in the second period as the Kings came charging back from yet another early deficit in a postseason full of comebacks. Jonathan Quick made 25 saves as the Kings moved one victory closer to their second Stanley Cup title in three years. “It certainly helps that we’ve done it time and time again,” said Williams, the repeat postseason hero dubbed Mr. Game 7 for his knack for series-deciding goals. “It’s a great result of the hockey game for us, definitely, but we have a lot of things to clean up. Certainly not our best game by any standards, especially ours, but we were able to get it done. That’s the most important thing.”