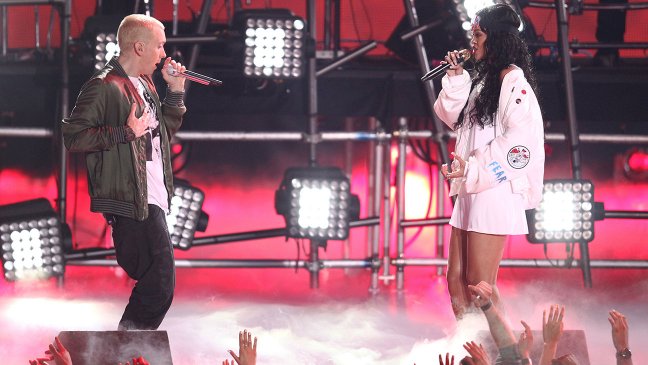 Eminem is the first artist to receive two RIAA Digital Single Diamond Awards, marking sales and streams of more than 10 million. Slim Shady picked up the honor for “Not Afraid,” a track from his 2010 album “Recovery,” to go along with the 11x multi-platinum single “Love the Way You Lie” (featuring Rihanna), from the same release, which has sold 4.5 million copies in the U.S. and more than 10 million worldwide. RIAA Chairman/CEO Cary Sherman marked the milestone: “We are delighted to recognize Eminem as the first artist to earn two RIAA Digital Diamond Awards. This singular achievement – earning a Diamond Award on two separate digital songs – is unparalleled, and we congratulate him on forever etching a mark in Gold & Platinum Program history.” In addition to two Diamond song honors, Eminem also has two 10x multi-Platinum Diamond certified albums: 2000’s “The Marshall MathersLP” and 2002’s “The Eminem Show,” both on Aftermath/Interscope. His career RIAA album awards represent more than 37 million sold in the U.S., placing him at No. 44 on the all-time RIAA list of “Top Selling Artists,” just behind Bob Dylan and ahead of Backstreet Boys, while his digital single certifications now surpass the 31 million mark, counting downloads and streams and spanning 10 separate songs, which places him No. 6 on the all-time list, behind Kanye West (31.5m) and ahead of Flo Rida (29.5m). His most recent album, “The Marshall Mathers LP2,” has sold 2.1 million according to Nielsen SoundScan since its November, 2013, release.