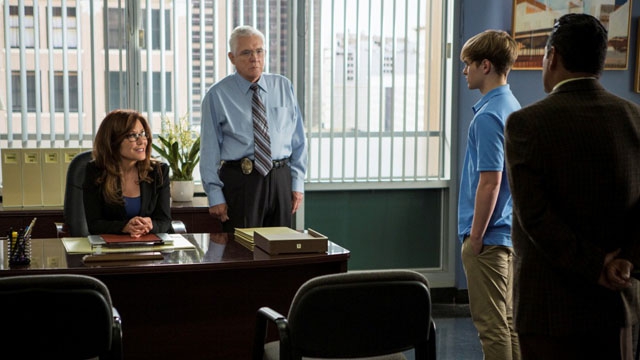 As fans of TNT's Top 10 drama Major Crimes prepare for the start of an all-new season, they will get the chance to enjoy a 19-hour marathon of the entire previous season. The marathon will begin running Sunday, June 8, at 2 a.m. (ET/PT) and will continue right up until the season three premiere on Monday, June 9, at 9 p.m. (ET/PT). Catch LATF The Magazine's feature interview with the show's star, Graham Patrick Martin HERE!

Cases the squad will be called upon to investigate in season three of Major Crimes include the disappearance of two kids and their father, the death of the defendant in a rape trial and a complex case involving arranged marriages and diplomatic immunity. In addition, one of Sanchez's old cases will resurface when it turns out a man he put away for manslaughter might be innocent. And Provenza and Flynn will be drawn to a ritzy estate to investigate the murder of a dog, but they're going to have to solve the case with unwanted help from an amateur sleuth they've encountered before. On the home front, Sharon Raydor will try to help Rusty put his turbulent past behind him, a goal made far more difficult when a member of the young man’s biological family returns, threatening Rusty’s hard-won stability.