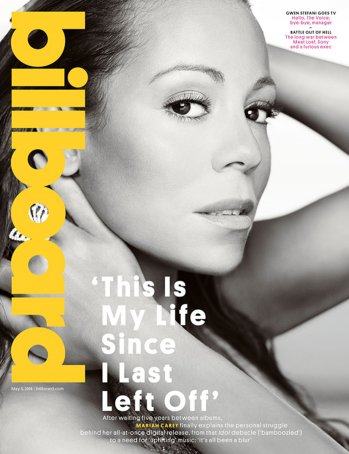 It’s been a long road to Mariah Carey’s14th album — a project she first began working on in 2010, before the birth of her nearly 3-year-old twins Moroccan and Monroe — that has been stalled over the years after stiff-performing singles and numerous tweaks to the track listing. But, as Billboard exclusively reveals in its latest cover story, Carey will be taking a surprise approach to the project by revealing her new album’s title, track listing, artwork and music all at once via to-be-announced digital partners (a physical release at retail is expected the following week.) “I have to be the one that announces this, especially the title,” Carey says, noting that the album takes its name from a “personal possession of mine that’s part of an entity that I’ve had almost all my life.” Though Carey doesn’t mention other artists in describing her strategy, it’s clear she’s taking a page out of the Beyonceplaybook.

It’s a particularly direct parallel when you consider that Beyonce herself was coming off an underperforming album (2011’s “4”) before opting to go the surprise route — much in the way that Carey’s last album, 2009’s “Memoirs Of An Imperfect Angel,” produced just one top 10 hit (“Obsessed”) and sold a disappointing 549,000 copies, low enough to cancel a planned remix album. Though last summer’s Miguel duet “#Beautiful” was a bonafide hit, peaking at No. 15 on the Hot 100 and selling 1.2 million downloads, a string of other singles (“Triumphant,” “Almost Home,” “Eternal [You’re Mine]”) have failed to catch fire along the way. In the Billboard cover story, out Monday, Carey and her new manager, Jermaine Dupri, talk candidly about the rocky road to the album’s launch – from the failed singles to her drama-plagued stint on “American Idol” in 2013 to the shoulder injury that nearly derailed her plans altogether (“I really downplayed that incident.”)