Words With: THE KIN... On Grit Pop, Touring With P!NK & More 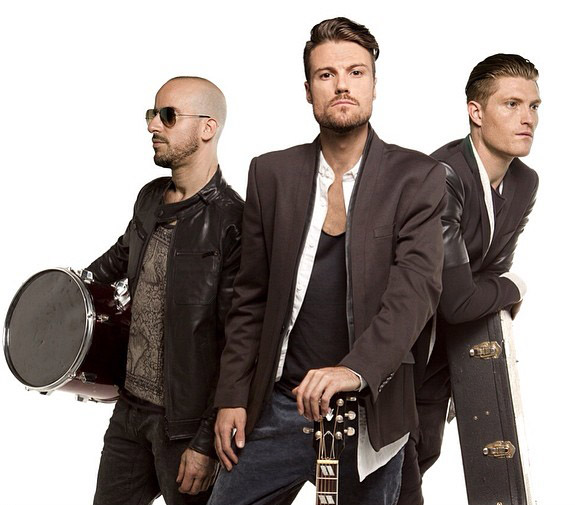 New York City-based The Kin’s new EP Get OnIt isn’t just a collection of songs as trussed to Big Apple life as the arthritic clatter of a subway line — it’s a command to those missing out on the trio’s hormone-laced dose of blues rock and dashing thrift-store chic, which acquired nationwide acclaim after the Kin’s avid appearance on TBS’ Conan in January.

Despite The Kin’s domestic success, two of its three members hail from overseas. The group is composed of Australian brothers Isaac "Hijack" Koren (vocals, keyboards), and Thorald Koren (vocals, guitar, keyboards), in addition to American drummer and percussionist Shakerleg. The latter is hesitant to reveal his real name, an unusually enigmatic move that belies his crew's extroverted expressiveness.

Case in point: Isaac, Thorald, and Shakerleg are notorious for causing mischief with “Musical Robberies,” in which the three of them surge into an arbitrarily chosen highly populated public area, such as a diner or airport, and surprise innocent and often amused on-lookers with an unprompted live performance. 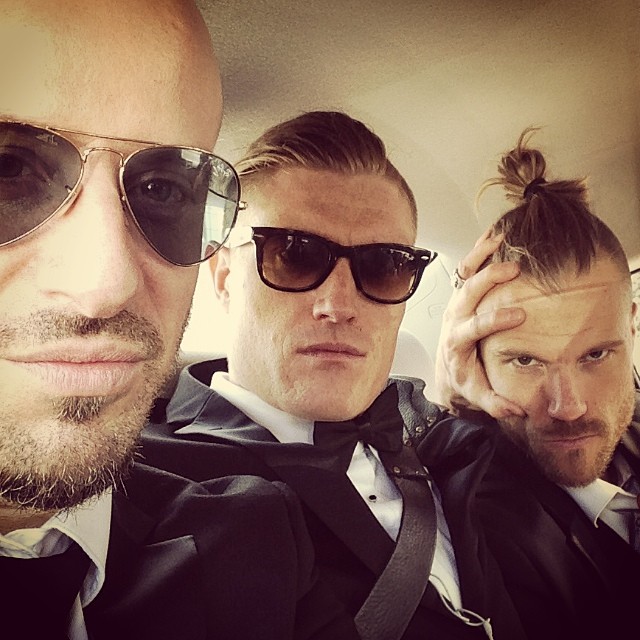 In layman’s terms, the Kin puts the “band” in “bandits.”

The Kin has nearly wrapped up its country-spanning circuit, which included Australian and U.S. visits together with trailblazing pop star P!NK. The tour’s penultimate 8pm show was at Los Angeles’ The Troubadour.

Abiding by their band name, Isaac and Thorald established a selfless kinship on stage. The brothers took turns on lead vocals, beholding the stout tag-team spirit of wrestlers in the ring as they blitzed through standards “Hope Machine,” “Boy, You’re a Pretty Girl,” and “On The Rise.” Meanwhile, Shakerleg pounded on the cymbals like King Kong on Brooklyn skyscrapers.

Yet the centerpiece and defining moment of the show was one of quiet grace, when the trio moved off stage and into a space within the middle of the audience, the latter listening intently to an unplugged version of “Wakes Me Up.” It suggested that the group didn’t need to perform a musical robbery to receive a crowd; it had already earned one.

The good-humored and riotous trio spoke to LATF in Los Angeles of their performance at The Troubadour. Before I start to ask my questions to the band, Shakerleg admonishes me, “Don’t expect this interview to be anything other than ridiculous.” 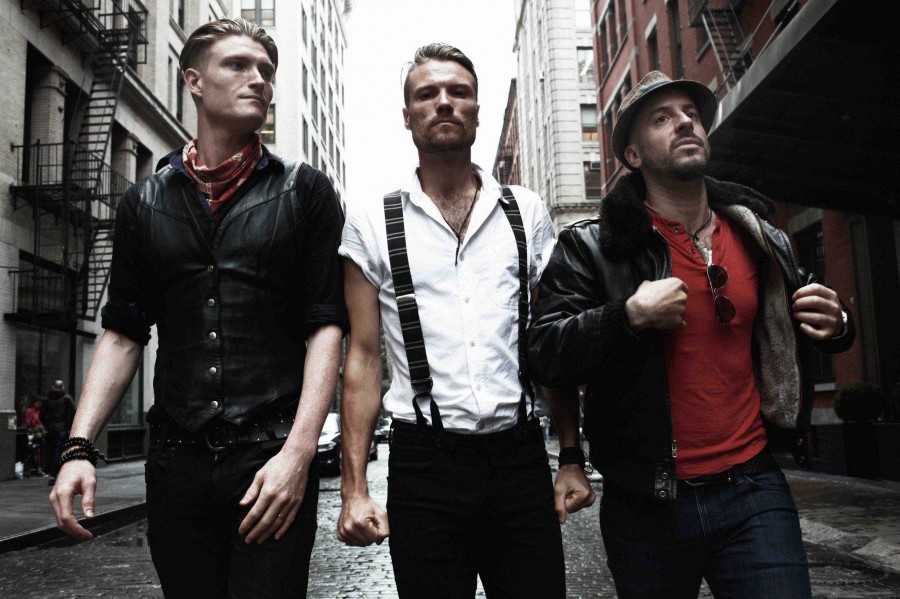 You guys landed in California less than a week ago. How has it been so far?

Isaac: We’ve been in California all week, and it’s been pretty hectic.

Thorald: Shakerleg has picked up a hobby. Why don’t you tell him about your new hobby, Shakerleg?

Shakerleg: Wow, you guys really need to stop. Nah, my hobby is that I’m trying new modes of transportation – to get from Fresno to Santa Anna. I’ve had a business meeting in Fresno and am going to fly out of here. Is that absurd?

Thorald: Well the reality is, you’ve had no business meeting. [Laughs]

The title of your new EP is Get On It. Is that title also a philosophy you guys have?

Thorald: Yes, you could definitely say that. We are on a tour bus, and we are on a mission.

Shakerleg: We could’ve called it Get On With It, but that’s a little sarcastic.

Isaac: Yeah, it’s Get On With It without the impatience. 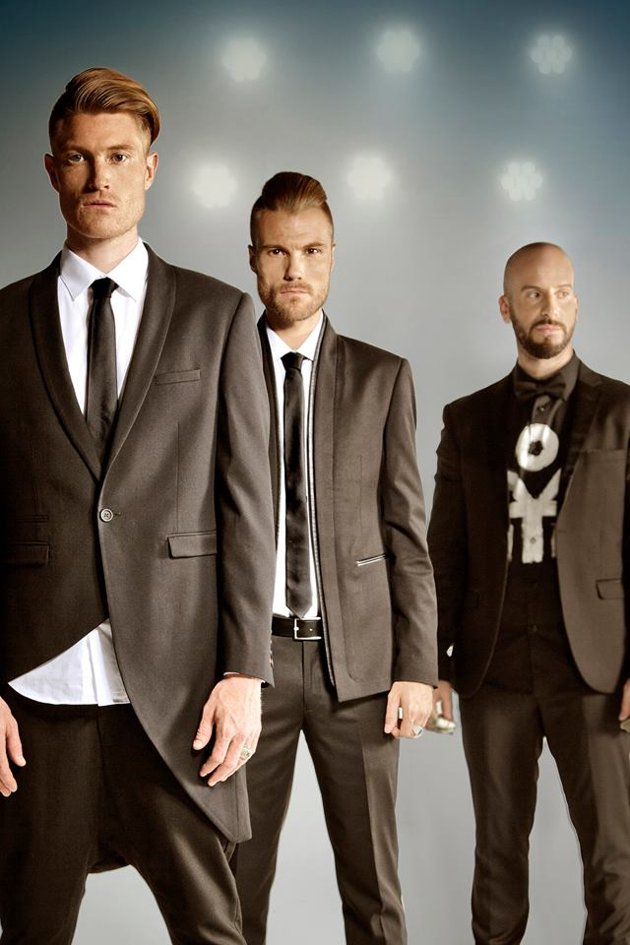 Whose idea was it for the EP cover?

Isaac:I’d love to tell you about that. That is our sister’s wife, she’s a designer, and she’s awesome. We’re surrounded by a lot of creative people in our family and we just love putting their work out there. It’s simple, and it’s cool.

She just sent us a few sketches that she drew without thinking too much about it. We all gravitated towards the arrow. We felt that it resonated with the Get On It vibe. She also took our photos, the ones in New York City that were pretty fun. Stef Mitchell is her name. She’s awesome.

You guys are known for launching “Musical Robberies.” How did that idea come about? Do you guys ever get in trouble?

Thorald:We’ve gotten in trouble many times. The idea of the musical robbery came about late at night. We had come out of a pretty boring show where it felt like we were just trying to make fans at a normal stage, in a normal room.

We just wanted to shake it up and break the fourth wall. We love bank robbery movies and we’ve seen subway street performers. So we figured we’d just go trespass and burst in somewhere and don’t tell anyone whom we are. Almost more like a piece of art – just go in and disturb the peace. It was really fun, so we’ve been doing them ever since.

Have you considered stepping it up, like musically robbing another band while they’re performing?

Thorald: We have thought of that, and we thought that would be really rude. [Laughs] We were tempted to do it, but –

Isaac: Well we kind of did it, but we did a fringe one. We’re not meant to tell anyone about this, but we musically robbed P!nk’s main male dancer. I guess he was a man, one of the main male dancers. It was probably insulting to get on her [P!nk’s] stage, especially when she was so kind to us, but we definitely hijacked the stage from her male dancer. 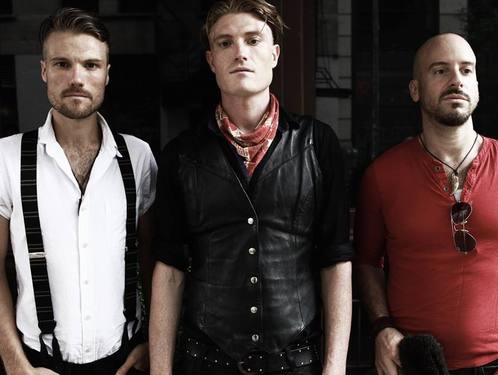 Speaking of P!nk, what was it like to tour with her?

Isaac: We can’t say anything about her, but she’s amazing. She’s in her own place, and we respect her so much. She’s got so many people that want to know something about her, and it’s not our place to talk about it. She’s awesome.

Thorald: We will say that she’s so humble, kind, hardworking, and so talented. She blows us away every night.

You teamed up with legendary producer Tony Visconti, best known for his work with David Bowie and T. Rex. Obviously, your sound is much different than theirs, how did Visconti cater to it?

Shakerleg: It was cool, man. He’s a legend. I liked his voice. He was able to talk to us without becoming irate, like the way some producers get.

Isaac: I liked how he let Thorald play guitar without worrying about the tuning too much.

Shakerleg, you’re known for not using drumsticks, but using your hands for percussion. How do you keep that up? Your hands must look like The Thing!

Shakerleg: No, it’s actually not that bad. The tape that is put on them, it helps to keep calluses down. I think the bones from the shock of all that drumming are going to take a shock at some point — it already is — but I’m trying to will all that out of my head and say, ‘Nope, it’s not gonna happen to me!’ So thanks, you guys: I’m going to lose my hand all for you. 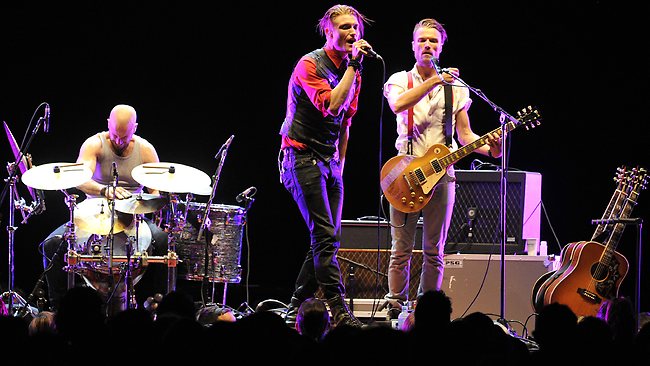 Have you begun work on a follow up for Get On It?

Thorald: The song’s called “War Paint.” I don’t think we can change the name of the song, but let’s try to come up with a new name for the record.

Shakerleg: We might just be able to make up a name. Remember the days when bands made up a name for a record that wasn’t a song?

The Kin Facebook bio says your genre is “grit pop.” Can you go into a bit more detail as to what “grit pop” is?

Shakerleg: I think it was a misspelling. We meant to spell “Britpop,” with a b, and it came out “grit,” so we kept it. [Laughs] No, no, no. We are the gum that is stuck on the bottom of your shoe that you cannot get off. There you go: grit pop.

Music
Kanye West: Where Is The Genius?

Music
A Word With: Charlotte Sometimes On Stage

Music
Music Review: The ROAMies At The Hotel Cafe