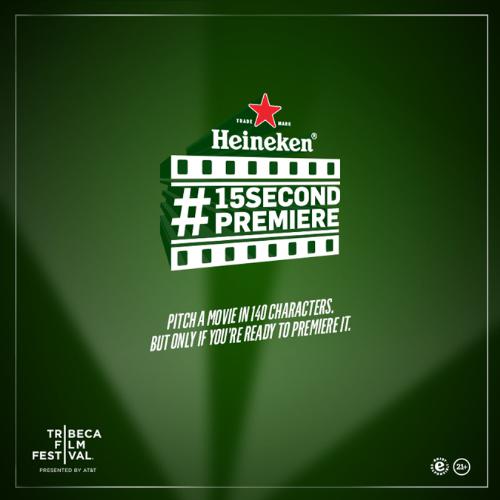 Heineken®, the official beer sponsor of the Tribeca Film Festival (TFF), announces #15secondpremiere, a social call-to-action that challenges people to get outside their comfort zone at TFF. From now until 11:59pm EST on Friday, March 7th, Heineken is accepting film pitches via Twitter and will select one to produce as an epic 15-second short to premiere at a private event at the Festival. People can enter by sending their movie pitch in a single tweet, using #15secondpremiere.

The winner of #15secondpremiere will be thrust into the limelight at Tribeca Film Festival, where they will serve as the face of the film, introducing the movie before industry influencers and media, and fielding questions from the audience after seeing the end result of their 140 character screenplay for the very first time. By bringing the biggest production of a15-second film to a private event at the Tribeca Film Festival, the brand will create a stage for Tweeters alike to answer for their tweet in front of a capacity crowd.

In its sixth year at the Festival, Heineken will take its sponsorship to new levels with unique events that encourage people to get outside their comfort zone and have legendary experiences.  #15secondpremiere is the first of these programs that the brand is unveiling. Fans can follow the brand's Facebook page (Facebook.com/Heineken) or Twitter (@Heineken_US) before and during the Festival to learn more.