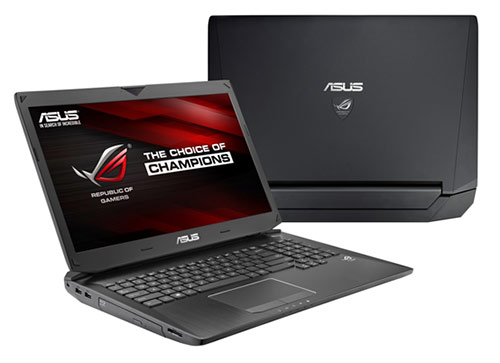 ASUS Republic of Gamers has raised the stakes for gaming notebooks, annoncing the G750JZ, G750JM and G750JS, new additions to their highly acclaimed range of G-Series high-performance gamer-centric notebooks.

Also in the line: The new NVIDIA® GeForce® GTX 800M Series GPUs come with up to 4GB of GDDR5 video memory to deliver incredible gaming power, with the G750JZ model featuring the top-of-the-range NVIDIA® GeForce® GTX 880M GPU. ASUS TurboMaster software is bundled with a version of GPU Tweak specifically designed for the new G-Series notebooks and lets users take that performance even further by easily and safely overclocking the GPU up to 5% — perfect for those times when every frame-per-second is critical.

The ASUS G750 continues to push the boundaries of performance and style.” said Brian Choi, Senior Product Manager at NVIDIA. “With the ultra-fast GeForce GTX 880M GPU delivering the most gaming horsepower to notebooks, these new notebooks are sure to be a gamer’s dream.”

The new G750 models add support for the latest 4K/UHD (ultra-high-definition) displays and its Trinity display technology means that up to three separate external displays can be simultaneously connected using the HDMI 1.4 and DisplayPort 1.2 interfaces.

The ASUS ROG G750JZ, G750JS, and G750JM notebooks are available for pre-orders now at major retailers and Newegg starting at $1399 USD.

Electronics
"The Walking Dead" Comes To Life In Mobile Game