That's All Folks For "Two And A Half Men" 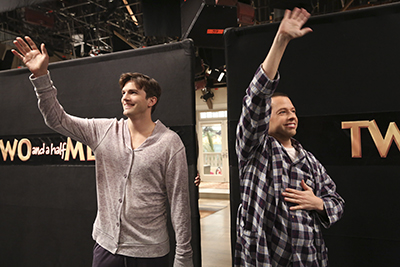 TWO AND A HALF MEN, which stars Ashton Kutcher and Emmy Award winner Jon Cryer and is executive produced by Chuck Lorre, ranked as television's most watched comedy for five consecutive seasons from 2005-2006 through 2009-2010. Upon its completion, 262 episodes will have aired. The series earned 47 Emmy Award nominations, with Jon Cryer winning twice, one for Outstanding Supporting Actor in a Comedy Series in 2009 and another for Outstanding Lead Actor in a Comedy Series in 2012. The series also won People’s Choice Awards for Favorite TV Comedy in 2007, 2008 and 2009 and Favorite New TV Comedy in 2004, among other awards.

Additionally, the new comedy THE ODD COUPLE, starring Matthew Perry as endearing slob Oscar Madison and Thomas Lennon as uptight neat freak Felix Unger, will make its series premiere Thursday, Feb. 19 (8:30-9:00 PM, ET/PT), between an original episode of THE BIG BANG THEORY and the TWO AND A HALF MEN series finale.