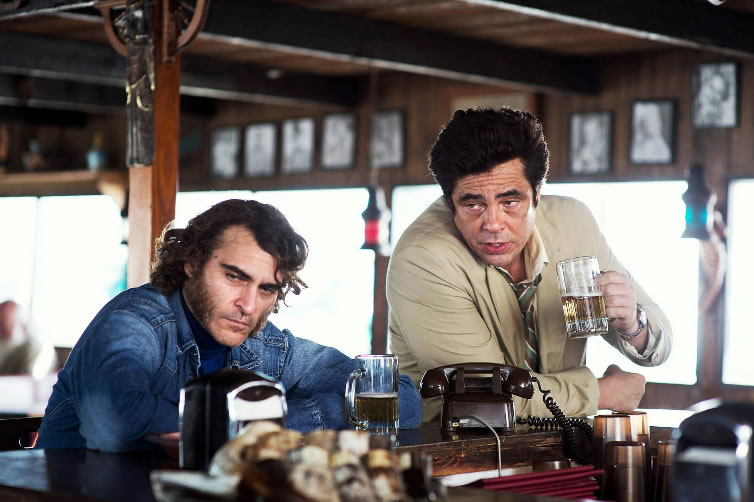 In maritime lingo, the concept of “inherent vice” refers to a hidden defect of goods or properties, which of itself is the cause of its own deterioration. Ironically, the term can also apply to this movie of the same name. When three eccentric artists: director Paul Thomas Anderson (Punch Drunk Love), star Joaquin Phoenix (Walk The Line), and author Thomas Pynchon, are brought together, the result is destined to be overwhelmingly unusual. Sometimes brilliant, but often times incredibly dense and cumbersome, Anderson’s seventh feature film and Pynchon’s first adapted material, creates a thicker haze of confusion than all the marijuana its protagonist smokes.

Thomas Pynchon wrote the original novel back in 2009, but it’s filmmaker Paul Thomas Anderson who takes the writing reins for “Inherent Vice” the film. As far as the story is concerned, here’s how it goes down. Joaquin Phoenix plays protagonist “Doc” Sportello, a private investigator living near the eternally sun-soaked Gordita Beach, California circa 1970. For Doc, the only activity he likes more than solving a hazy mystery is clouding his own mind with marijuana. 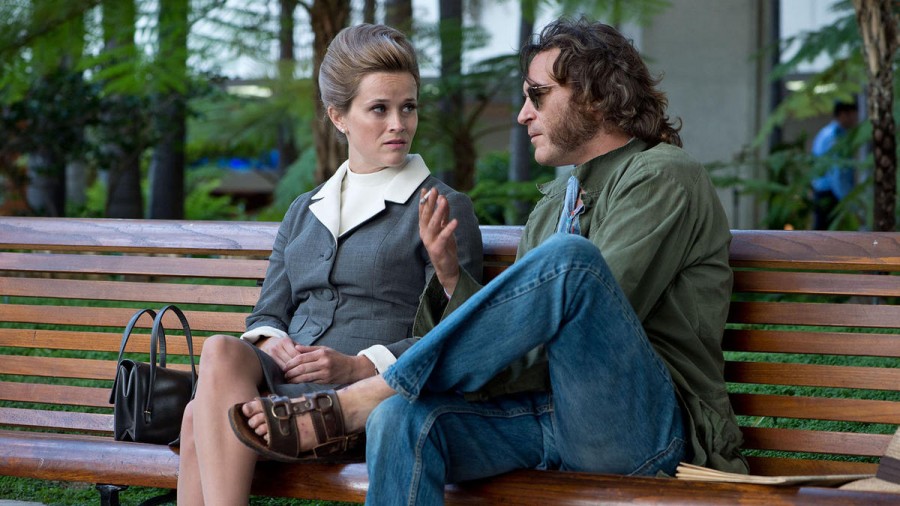 Doc is hit with one heck of a whodunit one afternoon after he receives a visit from his estranged ex-girlfriend Shasta Fay Hepworth (Katherine Waterston). Long story short; Shasta has a brand new boyfriend, a real estate magnate named Mickey Wolfmann (Eric Roberts), who has gone missing. Shasta thinks Wolfmann’s wife is behind his disappearance and Doc agrees to look into her claims.

As Doc follows one clue to the next, he meets an interesting array of potential perps including a thought-to-be-dead musician (Owen Wilson), a high-pitched masseuse (Hong Chau) and a crazy orthodontist (Martin Short). And if this carnival of crazies wasn’t wacko enough, Doc is forever bothered by an irrational LAPD Lieutenant and sometimes actor named “Bigfoot” Bjornsen (Josh Brolin). It’s a doozy of a story with plenty of memorable characters.

With that being said, however, the story Anderson and Pynchon weave is an admittedly complex affair. Because Anderson sticks closely to Pynchon’s verbose, hyper-literary dialogue structure, the film certainly doesn’t prove to be a more palatable version of the book. This is definitely a story that, while mostly about characters with below average IQs, will need its viewers to engage with the material using as much brain power as possible.

Delivering the majority of the befuddling monologues that Anderson’s script preoccupies itself with, is our hero Doc (Phoenix).  Phoenix is an Anderson regular, most recently working together on 2012’s “The Master.” The actor certainly has a knack for delivering Doc’s lengthy circular discussions with equal parts stoner slang and intellectual patois.

Anderson’s direction as a whole is just as confounding as Doc’s speech patterns.  With so many drifting deluges of discourse, the pace of the movie is painstakingly slow. And when it comes to a classic mystery story, a slow pace is worse than murder!

It’s funny to watch Doc try to deduce things in his foggy mind, but the fun level wears off somewhere between the first and second hour of the film. Not to mention that the movie is two and a half hours long, which does the attention span no favors as well.

Despite the unfortunate story problems, the acting is exceptional. Phoenix is an amazing fit for the dazed and confused Doc. Katherine Waterston makes a huge impact as Doc’s former flame Shasta. The British born actor is used sparingly, but every scene she’s in, especially her fairly explicit confessional towards the end of the film, is entirely captivating. Other deserving shout-outs go to Brolin, Reese Witherspoon, and Wilson. They truly give Anderson their all.

At its core, “Inherent Vice” is Anderson’s attempt at making a stoner movie for the intellectual crowd. Unfortunately, neither druggies nor academics will find this snoozer appealing.

Rated R for drug use throughout, sexual content, graphic nudity, language and some violence

Film
Movie Review: Reese Witherspoon Takes A Walk On The "Wild" Side