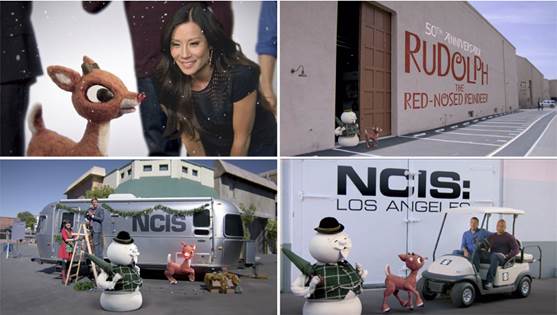 With a beguiling, first-ever mix of “Animagic” animation and live-action footage in a television promotion, stars from a variety of CBS series salute an appreciative Rudolph in a network on-air promotional campaign celebrating the holidays and the 50th anniversary of RUDOLPH THE RED-NOSED REINDEER. It returns for its 50th anniversary broadcast Tuesday, Dec. 9th (8:00-9:00 PM, ET/PT) on the CBS Television Network.  (Originally broadcast on CBS on 12/8/72, after an eight-year run on another network.)

These holiday spots, which launched on Thanksgiving and will run through the end of December, feature an array of CBS stars congratulating their four-legged network peer on his impressive milestone, as he and Sam the Snowman make their way backstage at “CBS-Land.”

In addition to Rudolph and Sam, the participating stars are:

CBS affiliates will have the opportunity to broadcast customized versions of the holiday promotional spots by inserting their own on-air talent into select moments and adding their station logo.

RUDOLPH THE RED-NOSED REINDEER was produced by “Animagic” pioneers Arthur Rankin, Jr. and Jules Bass and directed by Larry Roemer.  Romeo Muller wrote the television adaptation from a story by Robert L. May.