"The Wizard Of Oz" Iconic Cowardly Lion Costume To Be Auctioned 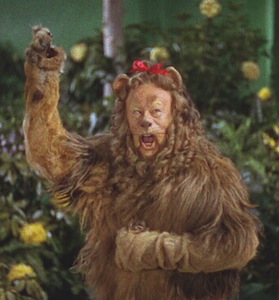 The original Cowardly Lion costume worn by actor Bert Lahr in the beloved classic The Wizard of Oz (1939) is ready to be crowned "king of the forest" during TCM Presents: There’s No Place Like Hollywood, a definitive auction of rare movie collectibles to be held at Bonhams in New York on Monday, Nov. 24. Fans can check out the Cowardly Lion costume and many other items from the auction during a pair of preview exhibitions to be held at Bonhams' locations in New York (Nov. 20-24) and Los Angeles (Nov. 6-9).

In addition to the Cowardly Lion costume, the There's No Place Like Hollywood auction will feature such Wizard of Oz memorabilia as actor Bert Lahr’s original script; the Witch Remover prop wielded by the Cowardly Lion in pursuit of the Wicked Witch; and an assortment of indelible Munchkin, Flying Monkey and Emerald City costumes. As previously announced, the sale will also feature a blue gingham "test" dress and pinafore worn by Judy Garland as Dorothy during the essential pre-production period, when costumes, hairstyles and all artistic aspects of moviemaking are refined prior to filming.

The Cowardly Lion costume was specifically worn by Bert Lahr in a number of iconic scenes, including when he first meets Dorothy and her friends along the Yellow Brick Road; as he sings the songs "If I Only Had the Nerve" and "If I Were King of the Forest," when he skips down the Yellow Brick Road on the way to Oz, when he helps rescue Dorothy, when the Wicked Witch melts, when the Wizard awards him a medal for "conspicuous acts of bravery" and when Dorothy clicks her heels together to return to her Kansas farm home.

For famed MGM costume designer Gilbert Adrian, the only option for creating a realistic lion costume in 1938 was to fashion it out of actual lion hides. He was challenged with locating several that visually matched each other so a few costumes could be made and used interchangeably throughout filming. Adrian soon discovered, however, that every available lion hide had very distinctive colors, hair patterns and scars, so he had no choice but to dress Lahr primarily in a single costume throughout filming.

In the Hollywood memorabilia art market, coveted costumes are often worn in one stellar scene or even a single memorable moment, but this Cowardly Lion costume – screen-matched by the distinctive features of the lion hide – was worn in more than a dozen scenes, making it a cultural touchstone. The costume has been given the white glove treatment by conservators at the Los Angeles County Museum of Art, and the make-up was reproduced with the direct involvement of Bert Lahr's family and members of the special effects team who worked on Jurassic Park.