Movie Review: "Annabelle" Is Exorcised Of "The Conjuring's" Quality 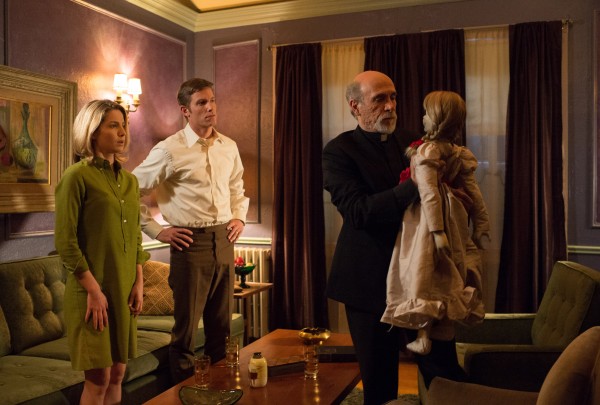 The demonically possessed doll from the opening scenes of last year’s hit horror movie, The Conjuring, takes center stage in the spin-off/.prequel Annabelle. Although Annabelle does deliver some fairly chilling individual scenes, unlike its predecessor, the new film lacks any real character depth or compelling, unique storylines. Without much substance to the narrative, the story of this evil doll terrorizing this family, becomes intermittently creepy, scary and very often silly. It’s Rosemary’s Baby, by way of Chucky from Child’s Play.

Annabelle is far from plot heavy, so I’ll try to tip-toe around the synopsis, so as not to spoil whatever surprises there are. Annabelle’s story begins a year before the opening of The Conjuring, sometime around 1969-70. We meet the perfect, All-American couple - soon-to-be doctor, John (Ward Horton) and his beautiful wife, Mia (Annabelle Wallis) while they are expecting their first child. But their charmed life is shattered after a brutal attack by Manson family-esque cultists. The couple survives, but soon odd occurrences begin to transpire and it begins to seem that whatever the cultists were up to, may have brought up a demonic force that has found its way into one of Mia’s dolls. The doll, Annabelle, seems to be the driving force behind the supernatural terror that the new family has to endure. 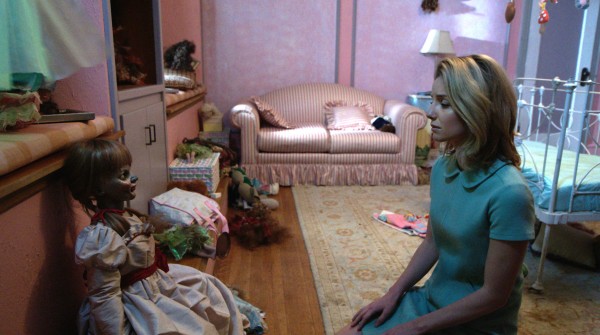 Other than Annabelle and a brief reprise of the opening of the previous film, there are no returning characters from The Conjuring – not even the paranormal investigators Ed and Lorraine Warren. That’s because the Warrens are real people and The Conjuring billed itself as “Based on the True Case Files of the Warrens.” It’s clear that Annabelle is more the creation of writer Gary Dauberman, than any “case file,” because it does not have the same kind of character dynamic as the first film. In The Conjuring, the Perron family, with all of their playfulness, games and fighting felt authentic. In Annabelle, Mia and John do not share that same authenticity. They feel like paper cutouts, as if they’re only meant to represent an idea of an idyllic life, rather than be people themselves. It’s surprising that Mia and John didn’t get along with the Annabelle doll better, since they’re basically Ken and Barbie themselves.

One of the major issues with the film is found in the premise itself. The character of Annabelle is sort of like that break-out supporting character in a hit comedy that steals every scene they are in, so in the sequel that character gets a huge part and you realize you were only a fan in small doses. The story and the occurrences around Annabelle in the new film stretch very thin, very quickly. 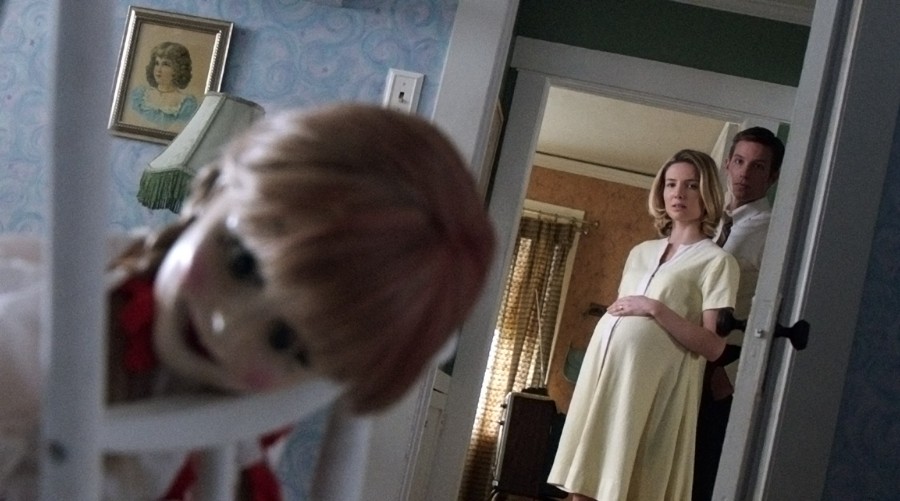 They begin with spooky incidents around the house, but once the haunted house elements have been exhausted, the film makes wild plot turns as if scrambling for anything that could help carry it to the end credits. Early on there is a moment where it seems as though maybe this film might be something special. It, unfortunately, does not last.

That’s not to say the film is without its selling points. Director John R. Leonetti crafts some superbly tense scenes that, even if they don’t stick with you like the “hide and clap” game from the original, there’s a good chance they could give you a jolt or make you uneasy while watching. Also, whether intentional or not, the whole scary doll element gives it a tongue-in-cheek feel that is fun to watch. In the theatre, there were just as many, if not more, laughs as there were screams.

If you’re interested in seeing Annabelle, the best thing you can do is to not go in expecting The Conjuring. Instead expect a fairly generic horror film, with very slight characters and a slim plot that nevertheless lands a couple good scares and is relatively entertaining. If that’s enough to get you to the box office, then there’s definitely a doll that wants to play with you.

Rated R for intense sequences of disturbing violence and terror