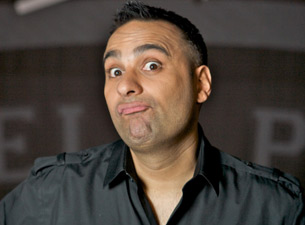 Netflix will premiere the Netflix comedy special "Notorious" and docu-series "Russell Peters vs. the World" on Monday, October 14th at 12:01 AM.  Peters' 70-minute stand-up comedy performance and four part docu-series following Peters on his global Notorious tour will be available to stream in all territories where Netflix is available - U.S., Canada, the UK, Ireland, Latin America, the Nordics and the Netherlands.

"Russell's genius is his uncanny gift to identify the idiosyncratic within all of us," says Lisa Nishimura, VP of Originals, Netflix. "He is prolific, fresh and a global force that will resonate with our members around the world."

"I've always prided myself on being outside the box and slightly ahead of the curve, which is why Netflix is the perfect fit for me," says Peters.   "Plus, the web took my career to a whole other level - we both owe a lot to the Internet."

Filmed live at the Allphones Arena in Sydney, Australia on March 15, 2013, "Notorious" features global phenomenon Peters as he brings his laugh-out-loud observational comedy to audiences for his world tour of the same name.  He uses humor and blends in stories about his Anglo-Indian family to touch on racial, ethnic, class and cultural stereotypes.