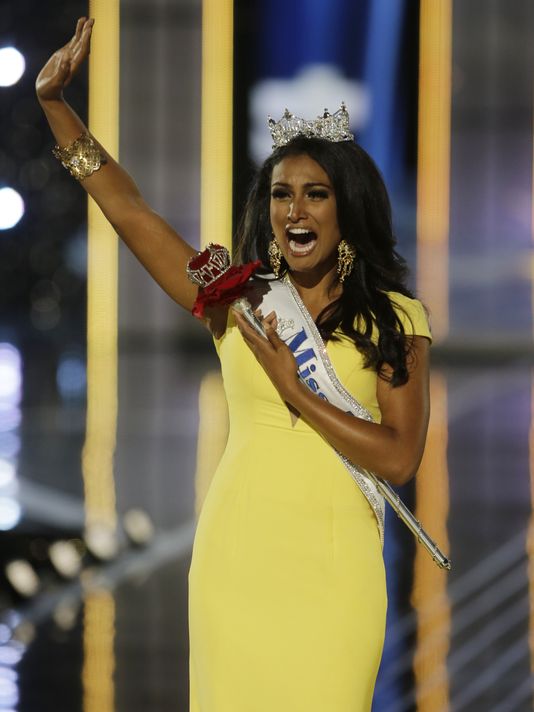 For the second year in a row, Miss New York has won the crown of Miss America 2014. Nina Davuluri replaces last year's winner,Mallory Hytes Hagan. was crowned tonight at the birthplace of the legendary competition in Atlantic City's Boardwalk Hall, broadcast live on ABC.Nina became the second consecutive contestant from New York and the first contestant of Indian descent to win the Miss America Competition.

Nina's acceptance of the highly-prized crown is just the beginning of a journey that will take her to every corner of the nation during her year of service as Miss America 2014. She will travel approximately 20,000 miles each month speaking to audiences about her platform, Celebrating Diversity through Cultural Competency and acting as the official National Goodwill Ambassador for Children's Miracle Network Hospitals. Children's Miracle Network Hospitals, a non-profit organization dedicated to saving and improving the lives of children by raising funds for children's hospitals, is the national platform partner of the Miss America Organization. In addition, Miss America 2014 will be the official spokesperson for R.E.I.G.N. Cosmetics, Joseph Ribkoff Inc. and Catalina Swimwear.

Nina is a student at University of Michigan. During her year as Miss America she will serve as spokesperson for STEM (Science, Technology, Engineering, and Mathematics) this year as she travels to Washington, DC to work with the Department of Education. Along with the coveted title of Miss America 2014, Nina won a $50,000 scholarship provided in part by Joseph Ribkoff Inc. and the Miss America Organization to continue her education. For the talent portion of the competition, Nina performed a Classical Bollywood Fusion dance.

Nina is the first Miss America to be crowned in Atlantic City, the competition's birthplace, since 2005.