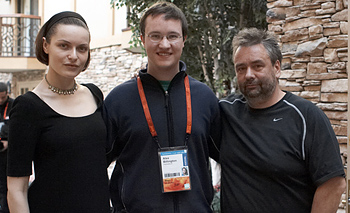 Movie pirates be warned, blogger Alex Billington is out to bring you down!

While attending a screening of the horror movie "The Sacrament" at the Toronto Film Festival this past Monday, Billington—critic and creator of Firstshowing.net—called 911 on a fellow moviegoer after seeing the suspect point his phone at the screen for extended periods of time.

Billington told BuzzFeed that the person was definitely trying to pirate the movie. According to the irate blogger, the perceived villain was most certainly not texting, emailing, or Facebook messaging his friends. The felon was pirating, pure and simple, during the prestigious film festival.

Much to the chagrin of Billington, 911 call responders laughed at the disgruntled critic, and even went so far as to question his thought process in making the call. When there are multiple heinous crimes occurring every second, shouldn’t the 911 lines remain open for actual threats?

Despite general Internet discontent surrounding his actions, Billington is remaining strong in his opinions. According to his Twitter account, "[Billington] will be starting a petition & support group for any/all TIFF press & industry who want to voice their concerns about phones being allowed [in the festival]."

For most, movies are a casual escape from the troubles of daily life. Billington, however, is looking to bring more real world trouble into his movie experience. His latest tweet reads, "changes need to be made and drastic measures are called for."

For this film critic, I think Billington needs to calm down. You’re a member of the press, so it’s not like you actually pay for your movie tickets. The dull, dim light of a cell phone screen in an otherwise black theater is annoying, but does not warrant a 911-distress call. Sit back, try to relax, and enjoy all of the free movies you get to consume every week Alex. You have a great job, and should be thankful.

Enough with the vigilante justice!